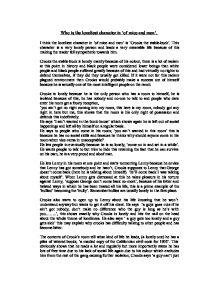 Who is the loneliest character in 'Of Mice and Men'?

Who is the loneliest character in 'of mice and men'. I think the loneliest character in 'of mice and men' is 'Crooks the stable-buck'. This character is a very lonely person and leads a very miserable life because of this making the reader fell sympathetic towards him. Crooks the stable-buck is lonely mainly because of his colour, there is a lot of r****m at this point in history and black people were considered lower beings than white people and black people suffered greatly because of this and had virtually no rights to defend themselves, if they did they usually got killed. If it were not for this r****m plagued environment then Crooks would probably make a success out of himself because he is actually one of the most intelligent people on the ranch. Crooks is lonely because he is the only person who has a room to himself, he is isolated because of this, he has nobody and no-one to talk to and people who dare enter his room get ...read more.

Remember bullies are usually lonely in the first place. Crooks also starts to open up to Lenny about his life knowing that he won't understand anyway but wants to get it off his chest. He says 'a guys goes nuts if he ain't got nobody, don't make no difference who the guy is long as he's with you........', this shows exactly why Crooks is lonely and hits the nail on the head about the whole theme of loneliness. He also says ' a guy gets too lonely and a guy gets sick' this may explain why crooks has difficulty talking to other people and has become bitter. The contents of Crook's room tell what kind of life he leads, (a lonely one) he has a piles of tattered books, 'a mauled copy of the Californian civil code for 1905'. This obviously shows that he reads a lot and regularly but more importantly states he has lots of free time due to his lack of social life again due to his colour ...read more.

if I want to', this shows that he's starting to believe like the rest of the workers and is being optimistic for the first time in the novel which is a happy moment until Curley's wife bulldozers the dream. When Crooks is on his role and defends himself she tell him to keep his place, 'keep your place then n****r', 'Crooks retired into the terrible protective dignity of a n****r' this shows his isolation and is showed his place and what he is good for. She tells Crooks that she 'could get him stringed up on a tree so easy it ain't even funny'. She's right and Crooks is back to square one with no-one and nobody and no dream which is very lonely situation indeed. Crooks has no-one to protect him from the evils of r****m and is destined for life on the ranch wallowing in his own loneliness and bitterness forever more, 'well jus' forget it, jus foolin, I wouldn't want to go to a place like that anyway'. ...read more.

The idea of this essay is a good one but it isn't really explored fully in the response. If Crooks was going to be the focus of the essay use him as the main point in the title; the title in this case suggests that a number of characters would be explored and a conclusion would be reached but this never materialises in the essay.