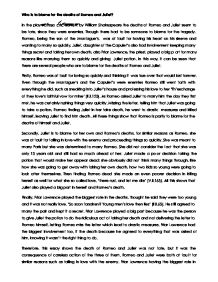 Who is to blame for the deaths of Romeo and Juliet? In the play Romeo and Juliet, by William Shakespeare the deaths of Romeo and Juliet seem to be fate, since they were enemies. Though there had to be someone to blame for the tragedy. Romeo, being the son of the Montague's, was at fault for having his heart on his sleeve and wanting to marry so quickly, Juliet, daughter of the Capulet's also had involvement keeping many things secret and faking her own death, also Friar Lawrence, the priest, played a big part for many reasons like marrying them so quickly and giving Juliet potion. ...read more.

All these things show that Romeo is partly to blame for the deaths of himself and Juliet. Secondly, Juliet is to blame for her own and Romeo's deaths, for similar reasons as Romeo, she was at fault for falling in love with the enemy and proceeding things so quickly. She was meant to marry Paris but she was determined to marry Romeo. She did not consider the fact that she was only 13 years old and still had so much ahead of her. Juliet made a poor decision taking the potion that would make her appear dead; she obviously did not think many things through, like how she was going to get away with faking her own death, how two kids so young were going to look after themselves. ...read more.

Friar Lawrence had the biggest involvement too, if the death because he agreed to everything that was asked of him, knowing it wasn't the right thing to do. Therefore, this essay shows the death of Romeo and Juliet was not fate, but it was the consequence of careless action of the three of them. Romeo and Juliet were both at fault for similar reasons such as falling in love with the enemy. Friar Lawrence having the biggest role in their deaths for many reasons, one being that he went along with everything the young kids asked of him. Though their deaths were a shame, good come from it, the Montague's and the Capulet's family war ended. ...read more.