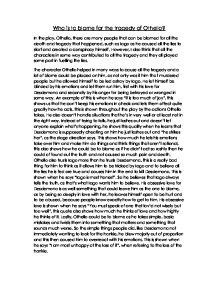 Who is to blame for the tragedy of Othello?

Who is to blame for the tragedy of Othello? In the play, Othello, there are many people that can be blamed for all the death and tragedy that happened, such as Iago as he caused all the lies to start and created a conspiracy himself. However, I also think that all the characters in some way contributed to all the tragedy and they all played some part in fuelling the lies. The character Othello helped in many ways to cause all the tragedy and a lot of blame could be placed on him, as not only was it him that murdered people but he allowed himself to be led astray by Iago. He let himself be blinded by his emotions and let them run him, first with his love for Desdemona and secondly by his anger for being betrayed or wronged in some way. An example of this is when he says "it is too much of joy", this shows us that he can't keep his emotions in check and lets them affect quite greatly how he acts, this is shown throughout the play by the actions Othello takes. He also doesn't handle situations that he's in very well or at least not in the right way. ...read more.

His furiousness with Cassio is brought across when he says, "Nothing can or shall content my soul 'til I am even with him." this also shows how much anger he has for him and he truly wanted to hurt him. Thirdly, he is the one who plants the seed of doubt into Othello's mind, in turn causing all of the disastrous events after. Also by only giving Othello a small piece of information, he allows his mind to think up its own story and think of the information what he wants and through all of this he continues to act very innocent, "Cassio... no, I cannot think he would steal away so guilty like", this quotation shows this. Desdemona is also partially to blame for what happened, as she can also be quite deceptive like Iago and can be quite bitchy at times. Her deceptiveness is shown when she lies to Othello about the hankie, claiming that it is not lost, "it is not lost but what if it were?" when she knows it is, this does not help as not only does it show how capable she is of lying to the man she loves but it also shows how deceptive she can be and this did not help Othello to believe her when she was being truthful. ...read more.

Roderigo could possibly be blamed for the tragedy, as he aided Iago by agreeing to kill Cassio, "How do you mean removing him?" and therefore starting off the series of killings. He also thinks that he can buy Desdemona's affections with any amount of money that he owns, "put money in thy purse.", even though she is a married woman. Roderigo is also trying to have an affair with married woman, "My daughter is not with thee." encouraging her to break her promise to her husband. In conclusion, in my opinion, more than one person is responsible as if certain people did not help Iago's story and follow along with it, then all the tragedy would not have occurred. Because it took all of the people to join together and add to all the conspiracy and lies. For example if Emilia hadn't of stole the hankie and gave it to Othello, then he wouldn't have had so much to believe that she was cheating on him. Also, if Othello hadn't of took such extreme actions when he found out things such as that Desdemona was possibly cheating, then maybe so many people wouldn't have been hurt, as he still chose to act that way and strangle Desdemona. ...read more.