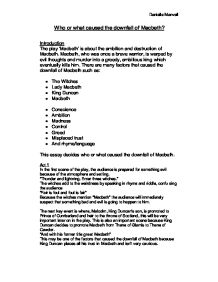 Who or what caused the downfall of Macbeth?

Who or what caused the downfall of Macbeth? Introduction The play 'Macbeth' is about the ambition and destruction of Macbeth. Macbeth, who was once a brave warrior, is warped by evil thoughts and murder into a greedy, ambitious king which eventually kills him. There are many factors that caused the downfall of Macbeth such as: * The Witches * Lady Macbeth * King Duncan * Macbeth * Conscience * Ambition * Madness * Control * Greed * Misplaced trust * And rhyme/language This essay decides who or what caused the downfall of Macbeth. Act 1 In the first scene of the play, the audience is prepared for something evil because of the atmosphere and setting. "Thunder and lightning. Enter three witches." The witches add to the weirdness by speaking in rhyme and riddle, confusing the audience "Fair is foul and foul is fair" Because the witches mention "Macbeth" the audience will immediately suspect that something bad and evil is going to happen to him. The next key event is where, Malcolm, King Duncan's son, is promoted to Prince of Cumberland and heir to the throne of Scotland, this will be very important later on in the play. ...read more.

Banquo is murdered but Fleance escapes. Banquo's ghost then haunts Macbeth during a banquet, "If I stand here, I saw him" Macbeth is the only one who can see this 'ghost', this means that it is his conscience playing tricks on him and it is all in his mind. The guests are worried and start to suspect something ill and evil with Macbeth. "Here my good lord. What is't that moves your highness" This clearly shows us the start of Macbeth's downfall. As they leave Macbeth plans his next move. He decides to go and find the Witches and ask them what to do, "I will tomorrow (And betimes I will) to the Weird Sisters" This tells us and the audience that he doesn't know what to do for himself and he needs the help from others to guide him. Hecate (queen of the witches/ dead - from ancient Greek mythology) enters, she is angry with the three Witches because they did not let her join in with talking to Macbeth, she specifically talks about Macbeth's fate, "He shall spurn fate, scorn death, and bear his hopes 'bove wisdom, grace, and fear. ...read more.

Facing his worst nightmare, Macbeth realises he can't beat Macduff but doesn't go out without a fight, but in the end he is slaughtered like all the innocent people he murdered as well. Conclusion Having considered the key events of the play and the factors in which to blame the downfall of Macbeth I have concluded that although Lady Macbeth and the witches played an important role in convincing Macbeth to kill Duncan, Macbeth was the most important of all three. It was Macbeth who agreed with them, Macbeth who committed the murder, Macbeth who decided to continue walking along the b****y path. However, it's very unlikely that all the events in the play would have happened, if there had not been help given by the witches and Macbeth's wife. The fatal combination of the three combined factors produced the tragic result. However there are many more influences to blame for the downfall of Macbeth like the ambition to be King, power, control and greediness, these all played a part in the downfall of Macbeth, warping a brave soldier's brain into a murdering, mad king that led to his brutal and tragic death. ?? ?? ?? ?? Danielle Manvell ...read more.