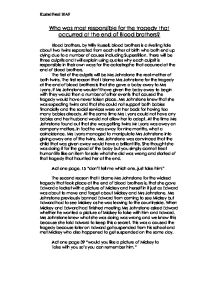 Who was most responsible for the tragedy that occurred at the end of Blood brothers?

Who was most responsible for the tragedy that occurred at the end of Blood brothers? Blood brothers, by Willy Russell, blood brothers is a riveting tale about two twins separated from each other at birth who both end up dying due to a number of causes including Superstition. There will be three culprits and I will explain using quotes why each culprit is responsible in their own ways for the catastrophe that occurred at the end of blood brothers. The first of the culprits will be Mrs Johnstone the real mother of both twins. The first reason that I blame Mrs Johnstone for the tragedy at the end of blood brothers is that she gave a baby away to Mrs Lyons. If Ms Johnstone wouldn't have given the baby away to begin with they would then a number of other events that caused the tragedy would have never taken place. Mrs Johnstone knew that she was expecting twins and that she could not support both babies financially and the social services were on her back for having too many babies already. At the same time Mrs Lyons could not have any babies and her husband would not allow her to adopt. ...read more.

The first reason that I blame Mrs Lyons is that she formed the Idea of taking away one of Mrs Johnstone's twins away. Mrs Lyons manipulated Mrs Johnstone she played on her weakness and then she convinced Mrs Johnstone to give one of the babies to her. I have explained the circumstances in a previous paragraph. Mrs Lyons made Mrs Johnstone swear on the bible. Knowing that she was religious and that she would not go back on her word once she had sworn on the bible Mrs Lyons had sealed the deal. What she did was manipulative evil and completely immoral. This led to the tragedy as if she had not manipulated Mrs Johnstone into giving away one of the babies she would not have had Edward and the tragedy would have not occurred. Act one page 10 "give one to me yes, yes" The second reason that I blame Mrs Lyons for the tragedy that happened at the end of blood brothers is because she made up a false superstition which eventually ended up killing them as the superstition left Mrs Johnstone helpless. ...read more.

If Sammy would not have offered Mickey the job then Mickey would not have got hooked on the pills Linda would not have been driven into the arms of Edward and Mickey would not have killed Edward avoiding the whole tragedy. Act 2 "look I'm offering all we need is someone to keep the eye." The third reason I blame Sammy is because it was Sammy's gun that ended up killing Edward if Sammy didn't have a gun then Mickey would not have had a weapon to kill Edward with and the whole disaster. Mickey knew that Sammy kept a gun under the floorboards and when he got angry he went straight for the gun. Act two "Mickey collects the gun from under the floor boards" Although there were three culprits there are other people the influenced the tragedy that happened at the end of blood brothers, other like Linda and Mr Lyons. Not only that two other things that were also a cause of the death of the twins being Coincidence and superstition. After analysing all of the evidence I think Mrs Lyons is most to blame for the tragedy at the end of blood brothers. Kushal Patel 10AF ...read more.