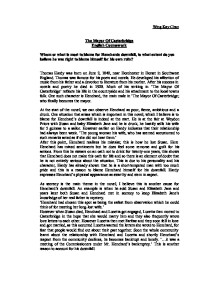 Whom or what is most to blame for Henchards downfall, to what extent do you believe he was right to blame himself

Wing Kay Chan The Mayor Of Casterbridge English Coursework Whom or what is most to blame for Henchards downfall, to what extent do you believe he was right to blame himself for his own ruin? Thomas Hardy was born on June 2, 1840, near Dorchester in Dorset in Southwest England. Thomas was famous for his poets and novels. He developed his affection of music from his father and a devotion to literature from his mother. After his success in novels and poetry he died in 1928. Much of his writing in 'The Mayor Of Casterbridge' reflects his life in the countryside and his attachment to the local towns folk. One such character is Henchard, the main male in 'The Mayor Of Casterbridge; who finally becomes the mayor. At the start of the novel, we can observe Henchard as poor, fierce, ambitious and a drunk. One situation that arises which is important in this novel, which I believe is to blame for Henchard's downfall is indeed at the start. ...read more.

Soon the whole community learnt about the relationship with Henchard and Lucetta and shortly Henchard's respect from the community declines, he becomes bankrupt and lonely. '...it was a meeting of the Commissioners under Mr. Henchard's bankruptcy.' This is another reason to account for his downfall. But the reason why the whole community learnt about the relationship between Henchard and Lucetta was because of Joshua Jopp. This man was out for revenge against Henchard and Lucetta, as Henchard declined him from being the manager and gave the job to Farfrae and as a result, Jopp hates him for that. Jopp behaves as a villain and as he knew about Lucetta's past he opens the package, which Henchard gave to him to deliver to Lucetta. 'Jopp, too, had had a convenient experience: he was the only one in Casterbridge beside Henchard and the close lipped Elizabeth who knew that Lucetta came truly from Jersey.' Jopp shares the letters with some townsfolk and they finally plan for a skimmity-ride to bring shame on them both. ...read more.

Another person who is also extremely loyal to Henchard is Elizabeth Jane even though he has been so undeserving from the way he has treated her. All the women give in to Henchard, finally however, Lucetta has been the most difficult. However Hardy portrays him also as not a bad man sometimes caring as Lucetta says to Elizabeth Jane '...hot-tempered man - a little proud - perhaps ambitious; but not a bad man.' In conclusion I believe that to some extent Henchard himself is to blame for his own downfall from these examples and these reasons however it was not his own entire fault about his downfall, other characters in the novel played a big part in his life as when new characters for example, Farfrae were introduced, his life suddenly declined. In the beginning he became the mayor and was certainly a respectable man in the community. It is all down to fate, as nearly everything that happened in the novel was against him and at the end of the novel Hardy indicates this by signifying him dead. ...read more.