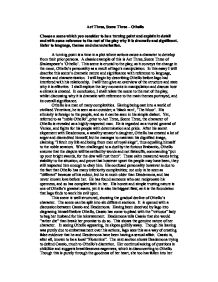 Why Act 3, Scene 3 is a significant turning point in Othello

Act Three, Scene Three - Othello Choose a scene which you consider to be a turning point and explain in detail and with some reference to the rest of the play why it is dramatic and significant. Refer to language, themes and characterisation. A turning point is a time in a plot where actions cause a character to develop from their prior persona. A classic example of this is Act Three, Scene Three of Shakespeare's 'Othello'. This scene is crucial to the play, as it conveys the change in the moor, Othello's personality as a result of Iago's manipulation. In this essay I will describe this scene's dramatic nature and significance with reference to language, themes and characterisation. I will begin by describing Othello before Iago had interfered with his relationship. I will then give an overview of the structure and state why it is effective. I shall explore the key moments in manipulation and discuss how a climax is created. In conclusion, I shall relate the scene to the rest of the play, whilst discussing why it is dramatic with reference to the main themes portrayed, and its overall significance. Othello is a man of many complexities. Having being cast into a world of civilised Venetians, he is seen as an outsider; a 'black ram', 'The Moor'. His ethnicity is foreign to the people, and so it can be seen in his simple dialect. Yet, referred to as "noble Othello", prior to Act Three, Scene Three, the character of Othello is revealed as a highly respected man. ...read more.

In the final part of the scene, Othello has succumbed to Iago's manipulation and is distraught with emotion, exclaiming "O monstrous, monstrous!" Iago, worried that Othello may relent tells him of seeing Cassio with the handkerchief, and this concludes to be the final piece of evidence needed to send Othello into a spiralling trance of jealousy. Throughout the scene, there are many key moments in Iago's manipulation of Othello. Iago tantalises Othello, making implications on why Cassio has left, referring to his leaving as "steals away" and in merely exclaiming "Ha! I like not that!" Iago turns the Moors attention to this, and this plants a seed of doubt in his mind. Iago also suggests that perhaps when Cassio was acting as a "messenger" between Othello and Desdemona, they too may have been forming a relationship. When he utters the simple word "indeed", this is full of innuendo, and every time that he repeats what Othello has said, he implies doubt. Iago is determined to remain outwardly faithful to Othello, claiming that he feels "men should be what they seem", which is contradictory in the fact that he himself is more dishonest than anyone else. Iago cunningly reminds Othello of Desdemona's deception to her father, hinting that she is capable of lying. When Iago can see that he has succeeded in increasing Othello's doubt, he warns him of becoming the "green eyed monster" which is ironic as it is exactly what he intends him to be. ...read more.

Act three; Scene 3 of 'Othello' shows the deterioration of a once noble man to a jealous "monster" consumed by irrational jealousy. It is the breakdown of this man portrayed in this scene that leads to the demise of Desdemona. Iago's methods of manipulation, and his manufacturing of proof are revealed throughout. Weakness and vulnerability are conveyed by Othello, Desdemona and Cassio in this scene as they are all subjected to Iago's conspiracy. We see Iago expose Othello's vulnerabilities and then take full advantage of them. Because of Othello's irrational state, the theme of emotion versus action is exposed, because he allows himself to become overcome by envy so much so that he would murder his wife. Indeed he had "loved wisely, but not well", because he had not the sense to ask her to justify the accusations, and loved her so much that the grief was too much for him to bear. The tragedy of this scene is that not only is Othello led astray by Iago, but also he is a threat upon himself. In placing all faith in Iago, he has no faith left in him to make the right decision. He allows his personal doubts to overcome his belief in his love, and he falls for the false security Iago lures him with. The scene is made effective through Iago's cunning manipulative language and the procrastination he uses. It is because of this that it marks the change of a seemingly powerful man, and makes it a significantly dramatic turning point. ...read more.

This essay picks a suitable scene when discussing significance, superbly analysing its components to describe its dramatic effect. I was pleased to see a number of paragraphs which ably support the argument that Act Three, Scene Three is significant to ...

This essay picks a suitable scene when discussing significance, superbly analysing its components to describe its dramatic effect. I was pleased to see a number of paragraphs which ably support the argument that Act Three, Scene Three is significant to the play. It was great to see that this essay acknowledges that Othello is a play, looking at audience responses throughout.

The analysis in the essay is strong. I would like to note the strength in embedding quotes - this essay includes quotes frequently, yet these do not hinder the flow of the argument. If you are looking for examples of embedding quotes, this essay is full of them. The frequent use of quotes means that there is analysis throughout the essay, and it rarely just retells the story because of this. I particularly liked the paragraph discussing how the scene was structured, but there could be improvements here. It is key to remember that Shakespeare is constructing the play, yet it is not mentioned once in this essay. Showing awareness that this is the case allows you to address why he may have chosen to have Iago manipulate Othello, for example, then allowing an exploration of audience response. This essay superbly addresses the audience response throughout, acknowledging the dramatic effect a play should bring, but they could strengthen their analysis by mentioning Shakespeare's role a bit more. Language, imagery are analysed throughout and technical terms are used strongly. The analysis in this essay should be admired!

This essay is clearly structured, with a strong introduction and conclusion. Each paragraph is well signposted, making it clear what it adds to the argument. I was slightly disappointed to see the use of the first person in the introduction - phrases such as "I shall" are really unnecessary and show a lack of sophistication. However, this is only included in the introduction and in no way detracts from the excellent essay that follows.