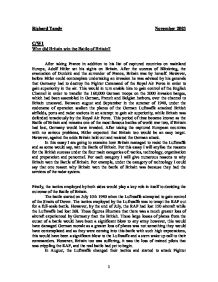 Why did Britain win the Battle of Britain?

Richard Tandy November 2003 C/W1 Why did Britain win the Battle of Britain? After taking France in addition to his list of captured countries on mainland Europe, Adolf Hitler set his sights on Britain. After the success of Blitzkrieg, the evacuation of Dunkirk and the surrender of France, Britain was by herself. However, before Hitler could contemplate undertaking an invasion he was advised by his generals that Germany had to destroy the Fighter Command of the Royal Air Force in order to gain superiority in the air. This would in turn enable him to gain control of the English Channel in order to transfer the 160,000 German troops on the 2000 invasion barges, which had been assembled in German, French and Belgian harbors, over the channel to Britain unscaved. Between august and September in the summer of 1940, under the codename of operation sealion the planes of the German Luftwaffe attacked British airfields, ports and radar stations in an attempt to gain air superiority, while Britain was defended tenaciously by the Royal Air Force. This period of time became known as the Battle of Britain and remains one of the most famous battles of world war two, if Britain had lost, Germany would have invaded. After taking the captured European countries with no serious problems, Hitler expected that Britain too would be an easy target. However, against the odds Britain held out and resisted the German attack. In this essay I am going to examine how Britain managed to resist the Luftwaffe and as some would say, win the Battle of Britain. For this essay I will anylise the reasons for the British success under the four main categories of: tactics, technology, organization and preparation and personnel. For each category I will give numerous reasons to why Britain won the Battle of Britain. For example, under the category of technology I could say that one reason why Britain won the battle of Britain was because they had the services of the radar system. ...read more.

Designed by Robert Watson-Watt, it worked by bouncing a radio wave against an object and measuring its travel to provide targeting information. By the spring of 1940, fifty-one radar bases had been built around the coast of southern Britain. Although unreliable, it allowed the British to track the German raids and send the fighters to where they were needed. The British fighters could stay on the ground until the last minute, so constant patrols were not needed and the Germans lost the element of surprise, which in many ways made up for the lack of numbers on the British side. The Germans were never able to successfully take out Britain's radar chain, and this plays a big part in why they were never able to get the better of fighter command. The radar system was obviously an important and significant acquirement to the British effort and provided the RAF with a huge advantage over the Luftwaffe in the Battle of Britain. The main fighter planes of the RAF were the Supermarine Spitfire and the Hawker Hurricane. The Germans relied primarily on their Messcherschmitt fighters and their Junkers dive-bombers - the famed Stukas. At this time these aircraft were the best the respective sides could produce. Britain had a number of advantages over the Luftwaffe. The Hurricane and Spitfire were exceptional planes - capable of taking on the might of the Luftwaffe. In the Battle of Britain the RAF could have won because our fighter planes, the Spitfire and the Hurricane proved to be better then the German Messerschmitts. They easily outmatched the Luftwaffe's fighters. The Spitfire was faster and more manoeuvrable but the Hurricane carried slightly more ammunition, proposed a more stable gun platform and was lethal against the German bombers. At the start of world war two, Germany had 4,000 aircraft compared to Britain's front-line strength of 1,660. By the time of the fall of France, the Luftwaffe had 3,000 planes based in north-west Europe alone including 1,400 bombers, 300 dive bombers, 800 single engine fighter planes and 240 twin engine fighter bombers. ...read more.

In the end, Britain had a lot to be thankful for. The skill and determination of her pilots could not be underestimated, but luck played an even more important role. The weather, so often derided in England, caused more problems than the Luftwaffe could cope with. Yet, it was the unfortunate action of one German pilot that altered the whole pattern of the war, but saved the RAF. Hitler's ego got in the way and changed Germany's tactics just when they had the British were they wanted them. Ultimately, I think this was the main reason for Britain's success. Britain was apparently only twenty four hours away from defeat yet this incredible change of tactics gave the RAF time to regroup, repair airfields and train new pilots. Once they regrouped, the RAF could continue to hit the Luftwaffe without sustaining anything like the damage they had been suffering. They could keep hitting the Germans until they could no longer afford to take any more damage. Ultimately, it could be argued that the Germans lost the Battle of Britain rather than the British winning it because of this. However, while the Germans made tactical errors, it still took the bravery and ability of the RAF to exploit these mistakes and defeat the Germans for the first time in the war. The Battle of Britain was a turning point in the sense that it was the first time that German forces had been defeated. The survival of Britain meant that it could later be used as the staring point for the liberation of Europe. However, some historians now regard it as being of less importance from a military point of view. Hitler may well not have been able to invade Britain even if the Luftwaffe had been able to defeat Fighter Command. The German armed forces were completely unprepared for an invasion and Operation Sealion was opposed by all of the German High Command. Hitler lost interest in Britain in 1941 when he ordered Operation Barbarossa, the invasion of the Soviet Union. 1 ...read more.