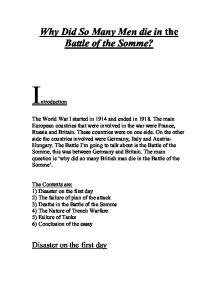 Why Did So Many Men die in the Battle of the Somme?

Why Did So Many Men die in the Battle of the Somme? Introduction The World War I started in 1914 and ended in 1918. The main European countries that were involved in the war were France, Russia and Britain. These countries were on one side. On the other side the countries involved were Germany, Italy and Austria-Hungary. The Battle I'm going to talk about is the Battle of the Somme, this was between Germany and Britain. The main question is 'why did so many British man die in the Battle of the Somme'. The Contexts are: 1) Disaster on the first day 2) The failure of plan of the attack 3) Deaths in the Battle of the Somme 4) The Nature of Trench Warfare 5) Failure of Tanks 6) Conclusion of the essay Disaster on the first day Introduction of the point: Commander in Chief Douglas Haig planned to win the war in one major battle. But he made a very big mistake and I'm going to tell you what happened with some evidence. What happened The battle began with a five-day bombardment of the enemy trenches. On 1 July Commander Douglas Haig ordered the advance to begin. He told his troops that they should walk across 'No mans land' because there would not be 'even a rat' alive in the German trenches. ...read more.

Deaths in the Battle of the Somme Introduction of the point: The battle of the Somme began in July and ended in November 1916. Very little ground was won or lost. But the loss of life was massive. Life Lost in the Battle of the Somme The British lost 420,000 men, the French lost 200,000 and the Germans lost 500,000. (A bar chart here showing the losses in the battle of the Somme) Conclusion of the point: The number of deaths was a large amount in the Battle of the Somme, mainly for the British troops. The Nature of trench warfare Introduction of the point: The Generals believed that the only way to win the war on the Western Front was to take over the enemy's trenches and drive their forces back until they surrendered. How the Trench System would work For four years the army generals followed the same tactics in their attempts to create a breakthrough. Each attack would begin with a heavy artillery bombardment from behind the front line, which was intended to break up the barbed wire defences, destroy the machine gun posts and many of the front trenches. The bombardment would often continue for days before the next stage in the attack . When the bombardment finished, the men in the trenches were ordered to go 'over the top'. ...read more.

Inside, the tank was noisy and extremely hot, with temperatures rising to 38 degrees Celsius. A crew could die if they stayed in the tank for more than three hours. A major effect of the tank in battle was psychological. They frightened the enemy and the morale of those at home watching newsreels, and those on the battlefield watching from the trenches was raised by the sight of these 'metal monsters' lumbering towards the enemy. As technology improved they came to play a greater part in trench warfare. (A PRIMARY SOURCE PHOTO OF A TANK HERE) Conclusion of the point: The British Soldiers had a failure of tanks, because; 1) The Tanks broke down. 2) They got stuck in the mud. 3) They won't tested very well. The British Soldiers could have made the tanks more reliable by testing the tanks out properly and could have made the tanks stronger. Conclusion of the point: The number of deaths was a large amount in the Battle of the Somme, mainly for the British troops. Conclusion of the essay There were many important reasons why so many men died in the Battle of the Somme. But in particular, I think the most important reason why so many men died in the Battle of the Somme was because the disaster on the first day. When 60,000 British troops were casualties and 20,000 of them were dead. By Hardeep Sarai ...read more.