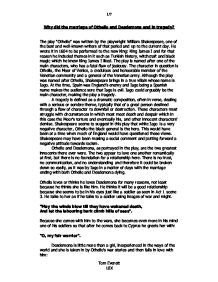 Why did the marriage of Othello and Desdemona end in tragedy?

Why did the marriage of Othello and Desdemona end in tragedy? The play "Othello" was written by the playwright William Shakespeare, one of the best and well-known writers of that period and up to the current day. He wrote it in 1604 to be performed to the new King: King James I and for that reason he included themes in it such as Turkish history, witchcraft and black magic which he knew King James I liked. The play is named after one of the main characters, who has a fatal flaw of jealousy. The character in question is Othello, the Moor of Venice, a credulous and honourable member of the Venetian community and a general of the Venetian army. Although the play was named after Othello, Shakespeare brings in a true villain whose name is Iago. At the time, Spain was England's enemy and Iago being a Spanish name makes the audience sure that Iago is evil. Iago could arguably be the main character, making the play a tragedy. A tragedy is defined as a dramatic composition, often in verse, dealing with a serious or sombre theme, typically that of a great person destined through a flaw of character to downfall or destruction. These characters must struggle with circumstances in which most meet death and despair which in this case the Moor's torture and eventually his, and other innocent characters' demise. Shakespeare seems to suggest in this play that white Iago is a very negative character, Othello the black general is the hero. ...read more.

We also must look at Iago's perspective. He is a man whose self-esteem and professional career have just been torn apart. Iago makes his actions of revenge toward Othello almost immediately by informing Brabantio, father of Desdemona, that "An old black ram is tupping (his) white ewe (Desdemona)." This action shows that Iago doesn't want the marriage to last and gets Brabantio angry by revealing the "secret" marriage to him and says that a moor has had s****l intercourse with his beauteous daughter. Iago's next motive becomes clear when he convinces Othello, "...that he (Cassio) is too familiar with his (Othello's) wife." Iago's motive here is to break the bond between Othello and Desdemona and he uses Othello's fatal flaw, jealousy. At the end of Iago's speech, Iago reveals that his greatest desire is: "...practicing upon his (Othello's) peace and quiet." This confirms the audiences' view on Iago's motives as Iago as he states that he is plotting to disrupt Othello's life. When Iago says, "Tis here, but yet confused," He is clearly admitting that he has some sort of plan of what he is doing even though the details have not been worked out yet. The reason why Iago has yet to reveal his plan is that he doesn't want to show his face till his plan has been done. During Iago's speech, he tries to assure himself of the true love Cassio holds for Desdemona when he says "That Cassio loves her, I do well believe 't. ...read more.

In the final scene, it is Othello who does not give anyone a chance to prove him wrong in believing in his wife's loyalty, and therefore he is the only one responsible for the resulting deaths. Othello refuses to discuss what he heard with Desdemona, though the foundation of a good marriage is communication. He does not give Desdemona a chance to defend herself against the outright lies, justifying his actions: "I'll not expostulate with her, lest her body and beauty unprovide my mind again. . ." When he finally does confront her, Othello will not accept anything she says, though it is all the truth. Othello is simply too stubborn, blinded by his jealousy that has turned into rage. Desdemona's own servant, Emilia, assures Othello that nothing has ever happened between his wife and Cassio, and that she has heard "... Each syllable that breath made up between them" However, Othello cannot believe her because he is so irrational. He even admits in the midst of his anger that "O, the world hath not a sweeter creature " Othello still lets his jealousy and irrational thoughts get the better of him. After he has suffocated Desdemona, he explains to Emilia, "But that I did proceed upon just grounds To this extremity. Thy husband knew it all" Othello admits his only proof of any adultery was the words of her husband Iago. "My friend, thy husband, honest, honest Iago" Once Othello finds that all he had been led to believe was lies, he commits suicide, having realized his stupidity and faithlessness in his own wife, whom he truly did love. 1/7 Tom Everett 10X ...read more.