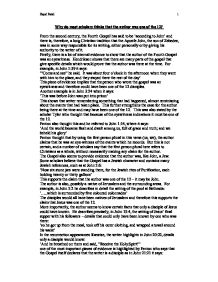 Why do most scholars thinks that the author was one of the 12? - The Fourth Gospel 'according to John'.

Why do most scholars thinks that the author was one of the 12? From the second century, the Fourth Gospel has said to be 'according to John' and there is, therefore, a long Christian tradition that the Apostle John, the son of Zebedee, was in some way responsible for its writing, either personally or by giving his authority to the writer of it. Firstly, there is a lot of internal evidence to show that the author of the Fourth Gospel was an eyewitness. Hendriksen shows that there are many parts of the gospel that give specific details which would prove that the author was there at the time. For example, in John 1:39 it says: '"Come and see" he said. It was about four o'clock in the afternoon when they went with him to the place, and they stayed there the rest of the day' This piece of evidence implies that the person who wrote the gospel was an eyewitness and therefore could have been one of the 12 disciples. ...read more.

The Gospel also seems to provide evidence that the author was, like John, a Jew. Some scholars believe that the Gospel has a Jewish character and contains many Jewish references, such as at John 2:6: 'Now six stone jars were standing there, for the Jewish rites of Purification, each holding twenty or thirty gallons' This supports the claim that the author was one of the 12 - it may be John. The author is also, possibly a native of Jerusalem and the surrounding areas. For example, in John 5:2 he describes in detail the setting of the pool at Bethesda: '.....which is surrounded by five coloured colonnades' The disciples would all have been natives of Jerusalem and therefore this supports the claim that Jesus was one of the 12. More importantly, the author seems to know certain facts that only a disciple of Jesus could have known. He describes precisely, in John 13:4, the setting of Jesus' final supper with his followers - details that could only have been known by one who ...read more.

who also lay on his breast, himself published the gospel, while he was staying at Ephesus in Asia" he claimed that this information came from a very reliable source, Polycarp, the Bishop of Smyra, who, in turn, was said to have heard this from John himself. This is the traditional view according to scholars John Marsh and George Beasly-Murray. Clement of Alexandria who also wrote in the late second century said that: 'Last of all John, perceiving the bodily facts had been made plain in the gospel, being urged by his friends, and inspired by the Spirit, composed a spiritual Gospel.' In more recent times, scholars and archaeologists have uncovered new evidence concerning the authorship. The Muratorian Canon accredits the fourth gospel and a number of apostles with John as the spokesperson and author. In conclusion, there is a lot of evidence, both internal and external, which has led many scholars to believe that the author was one of the 12 - and more specifically John the son of Zebedee. Kajal Patel 1 ...read more.