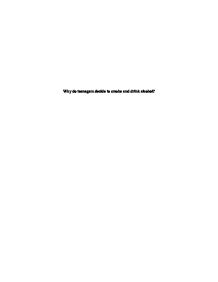 Why do teenagers decide to smoke and drink alcohol?

Why do teenagers decide to smoke and drink alcohol? Abstract Teenagers may be involved with psychoactive substances in various ways. Experimentation with alcohol and drugs during adolescence is common. Unfortunately, teenagers often don't see how their actions today will have negative consequences tomorrow. They also have a tendency to feel indestructible to the problems that others experience. Using alcohol and tobacco at a young age increases the risk of using other drugs later. Some teens will experiment and stop, or continue to use occasionally, without significant problems. Others may develop a dependency, moving on to more dangerous drugs and causing significant harm to themselves. If teenagers consume these substances, they'll get diseases at earlier age. Some teenagers try to imitate those people who smoke because they see that this people seem to have a lot of fun; but they are not being rational. Many people act in ways and make decisions without thinking very much or being careful. Adolescence is a time for trying new things. Teens use alcohol and other drugs for many reasons, such as curiosity, because it feels good, to reduce stress, to feel grown up or to fit in a group of popular guys. It is difficult to know which teens will experiment and stop and which will develop serious problems. Researches show that teenagers at risk for developing serious alcohol and drug problems include those with a family history of substance abuse, the ones who are depressed, who have low self-esteem, and who feel like they don't fit in on a group of peers. Drug use is related with a variety of negative consequences, including increased risk of serious drug use later in life, school failure, and poor judgment, which may put teens at risk for accidents, violence, unsafe sex, and suicide. ...read more.

Also people think that addiction is a disease that it doesn't have a cure and the only way to treat it is to avoid the addiction, lifelong abstinence and be in constant vigilance by the ones that surround you. But all these ideas about addiction are not quite right because they mix the process of addiction with its impact. They don't explain much about the subject so they can help us understand the addiction. Smokers use cigarettes to reduce anxiety, sadness, boredom. Depressed people use it to forget about their problems because the nicotine can give pleasure and can ease pain. If these kinds of people get used to cigarettes to regulate emotional states it would be very difficult to take it away if you don't have an alternative to alleviate those states, so they will return to their addiction and it would become stronger than before. It is too difficult for smokers to try leaving their addiction for the nicotine. They would need the support of their family, peers or well instructed people to help overcome his or her addiction. Because nicotine addictive people can not stay like half an hour without smoking it makes them too difficult to quit it. There are even smokers that are too use to nicotine that they can not live without it. Those people that are dependent of the nicotine but would like to stop smoking, they have to leave the cigarettes little by little, because if they decided to leave it right away it would be prejudicial for their organisms. We have to see also the right time to stop smoking, it is just better to try quitting the cigarettes in a time when you are relaxed, without any pressure, most likely on vacations. ...read more.

So it's their choice to do what is best for them, if continuing their addiction or regenerate. Through our survey we could see some of adolescents opinions. We could see that most of them have already use psychoactive drugs. This teenagers are between fifteen and sixteen years old. Apparently, most teenagers decide to use psychoactive drugs for mere curiosity. Also, when they feel bad about something they think that this substances will just cut the pain off. Friend's influence is an important issue because most of the teenagers just imitate their peers, so if some guy smokes and it seems that he has a lot of cool styles and girls around him, the other teens will want that too. It also seems that alcohol and cigarettes are the most common drugs that teenagers deal with, but this doesn't means that we shouldn't worry that much because this is just the beginning that might lead to the use of other substances. But, according to our survey, still we can see that there are some few teenagers that have made up their minds and have a lot of personality because they don't need drugs in order to live normally happy. But we can also notice that there are future addicts who reach for drugs any time the times get too tough and their best isn't enough because they make them feel good. And there is also teenagers who simply drink alcohol and smoke because that's what grown ups do. On our project, we obtained clear answers, nevertheless, there could be some bias on the survey because teenagers may lie that they drink and smoke because it's just "cool". Anyhow, our hypothesis was correct and teenagers do decide to use psychoactive drugs because of internal and external factors such as lack of affection, peer pressure, psychological disorders and boredom. ...read more.