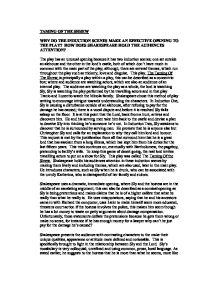 Why Do the Induction Scenes Make an Effective Opening To the Play?

TAMING OF THE SHREW WHY DO THE INDUCTION SCENES MAKE AN EFFECTIVE OPENING TO THE PLAY? HOW DOES SHAKESPEARE HOLD THE AUDIENCES ATTENTION? The play has an unusual opening because it has two induction scenes; one set outside an alehouse and the other in the lord's castle, both of which don't have much in common with the main part of the play, although, there are several themes, which run throughout the play such as trickery, love and disguise. This play, The Taming Of The Shrew, is principally a play within a play, this can be described as a concentric box; where and audience are watching actors, which are also an audience of an internal play. The audience are watching the play as a whole, the lord is watching Sly, Sly is watching the play performed by the travelling actors and in that play Tranio and Lucentio watch the Minola family. Shakespeare chose this method of play writing to encourage intrigue towards understanding the characters. ...read more.

To keep this game of deceit going, the real lord invites travelling actors to put on a show for Sly. This play was called The Taming Of the Shrew. Shakespeare holds his audiences attention in these induction scenes by making them lively and including themes, which are also used, later in the main play. He introduces characters, such as Sly when he is drunk, who can be associated with the unruly Katherina, who is disrespectful of her family and suitors. Shakespeare uses a dramatic, immediate opening, where Sly and the hostess are in the middle of an escalating argument; this can also be described as a comical opening as Sly is being pretentious and makes claims that he is of a higher calibre that what he really than what he really is. He uses misquotations, saying that he and his ancestors came in with Richard the conqueror, uses Latin to make himself seem more educated, threatens court action if the hostess involves the police, this makes him seem though he has a lot money to waste on petty arguments about damage compensation. ...read more.

He gives orders in an imperative voice but does not insult, he uses dulcet tones, which calmly demand admiration and deliberation, but he dismisses other people's opinions. He uses stresses and unstressed syllables when making a speech, this emphasises important words, this is known as limbic speech. He wants entertainment out of playing a trick on Sly, because he is a lord he has a lot of free time, he also has the funds the carry it out to an eccentric scale to make it a 'virtual reality' for Sly. He wants Sly to forget himself, become someone different. Sly is expected to believe an illusion and 'play' along. Shakespeare uses various ways in which to generate humour and comedy to make his writing more interesting for the audience. The humour within the 'trickery and deception' theme lies within the Lord deceiving Sly for his own humour and entertainment. Disguise, in the induction scenes, can be noted when Bartholomew, the pageboy, is disguised as Sly the Lords wife, and the real Lord dressed as a serving man. ...read more.