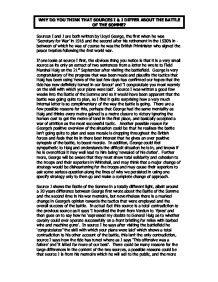 WHY DO YOU THINK THAT SOURCES I &amp; J DIFFER ABOUT THE BATTLE OF THE SOMME? Sources I and J are both written by Lloyd George, the first when he was 'Secretary for War'

WHY DO YOU THINK THAT SOURCES I & J DIFFER ABOUT THE BATTLE OF THE SOMME? Sources I and J are both written by Lloyd George, the first when he was 'Secretary for War' in 1916 and the second after his retirement in the 1930's in-between of which he was of course he was the British Priminister who signed the peace treaties following the first world war. If one looks at source I first, the obvious thing you notice is that it is a very small source as its only an extract of two sentences from a letter he wrote to Field Marshal Haig on the 21st September after visiting the battlefield. George is very congratulatory of the progress that was been made and plaudits the tactics that Haig has been using 'news of the last few days has confirmed our hopes that the tide has now definitely turned in our favour' and 'I congratulate you most warmly on the skill with which your plans were laid'. ...read more.

Source J shows the Battle of the Somme in a totally different light, albeit around a 20 years difference between George first wrote about the Battle of the Somme and the second time in his war memoirs, but nevertheless there is a marked change in George's opinion towards the tactics that were employed and the overall success of the battle. In actual fact this source is a total contradiction to the previous source as it says 'I travelled the front from Verdun to Ypres' and then goes on to say how he 'expressed my doubts to General Haig as to whether cavalry could ever operate successfully on a front bristling for miles with barbed wire and machine guns'. In source I he says after visiting the battlefield he 'congratulates' 'the skill with which your plans were laid' which shows a total contradiction to his other account of the battle, this isn't the only contradiction, source I says how the tide has tuned where as J says 'This offensive was a failure' and 'it killed far more of our best'. ...read more.

The content of J could still of been what he thought when he wrote I but without wanting to dent morale he curbed his feelings for the battle in the hope it would be the best thing to do in the long run. Another probably more unlikely possibility, could be that George was just fickle and changed his view of the battle to suit public opinion which was critical of the Battle of the Somme and the General who put so many men to the slaughter. These two sources show such a large contradiction it is fair to deem there must be a major reason or reasons for George to show such a large contradiction between his initial thoughts of the battle and Haig to his afterthoughts of them. Although it is still possible that both sources may still be truthful to some extent, it is just that in source I especially he gave a false picture for the benefit of the country, even if the true picture may have been much different, not just to make him self look good. ...read more.