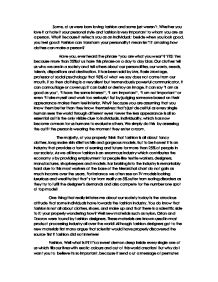 Why fashion is important.

Some, of us were born loving fashion and some just weren't. Whether you love it or hate it your personal style and fashion is very important to whom you are as a person. Why? Because it reflects you as an individual; beside when you look good, you feel good! Fashion can transform your personality I mean isn't it amazing how clothes can make a person? Have you, ever heard the phrase "you are what you wear"? YES! Yes because more than 20%of us hare this phrase on a day to day bias. Our clothes tell us who we are in a society and tell others about our personalities, our wants, needs, talents, dispositions and destination. ...read more.

We simply do this by assessing the outfit the person is wearing the moment they enter a room. The majority, of you properly think that fashion is all about fancy clothes, long snake skin stilettos hills and gorgeous models. But to be honest it is an industry that provides a form of earning and future for more than 25% of people in our society. As we all know fashion is an enormous industry which contributes the economy y by providing employment for people like textile workers, designers, manufactures, shopkeepers and models. Bar braking into the industry is remarkably hard due to this most workers at the base of the hierarchal chart do not gain as much income over the years. ...read more.

Although fashion designers got to the new materials first many argue that scientist would have properly discovered the source first if fashion did not interfere! Fashion. Well what is it? It's a sweet demon deep inside every single one of us which fills our lives with exotic colours and out of this world creation! But why do I want you to believe its so important, because it send out a message of permutes importance to not just our peers but to other individuals we do not talk to directly; Believe it or not statistics show that being well dressed is psychologically important because confident in our appearances leads to confident in our success in life and if your that one person who doesn't care about fashion and style then your really not living to your full potentials! ...read more.

The response is coherent and focused, dealing with a range of issues and implications relating to fashion. However, certain issues raises could have been dealt with in greater detail. For example, Ã¢â‚¬Å“eating disordersÃ¢â‚¬Â, as mentioned at the end of paragraph ...

The response is coherent and focused, dealing with a range of issues and implications relating to fashion. However, certain issues raises could have been dealt with in greater detail. For example, Ã¢â‚¬Å“eating disordersÃ¢â‚¬Â, as mentioned at the end of paragraph three is a poignant issue for many readers and so perhaps mentioning a well-known celebrity example here would have worked well.

This leads to the point that is the absence of any real counter-argument to strengthen the writerÃ¢â‚¬â„¢s own conclusion; eating disorders could have been explored as being a case where fashion is arguably considered a detrimental industry. Despite this, the candidate uses a number of features deftly to engage the reader. For example, synthetic personalisation (Ã¢â‚¬Å“in our success in lifeÃ¢â‚¬Â), direct address (Ã¢â‚¬Å“you feel goodÃ¢â‚¬Â) and statistics (Ã¢â‚¬Å“25% of peopleÃ¢â‚¬Â) are all features common in successful articles which add authenticity to the text and create a relationship between writer and reader. In addition to this, variation in sentence length is also impressive, with minor sentences such as Ã¢â‚¬Å“Fashion. What is it?Ã¢â‚¬Â helping capture the readerÃ¢â‚¬â„¢s attention. However, this is also an example of rhetorical questioning which, along with exclamatory statements, are used excessively within the response Ã¢â‚¬â€œ such devices are only effective when used sparingly.

Unfortunately, careless errors are commonplace within the text. The candidate has difficulty using the apostrophe correctly, as in the example of Ã¢â‚¬Å“yourÃ¢â‚¬Â [youÃ¢â‚¬â„¢re]. Semi-colons accuracy is somewhat hit-and-miss yet given that this is sophisticated punctuation the candidate is not judged harshly for this. There are a number of Ã¢â‚¬ËœtyposÃ¢â‚¬â„¢, such as Ã¢â‚¬Å“properlyÃ¢â‚¬Â [probably] and Ã¢â‚¬Å“scientistÃ¢â‚¬Â [scientists] which are disappointing in coursework pieces Ã¢â‚¬â€œ note please, spell check is not a substitute for proof-reading. However, there are numerous examples of higher-level syntax as in the example of Ã¢â‚¬Å“psychologicallyÃ¢â‚¬Â, Ã¢â‚¬Å“camouflageÃ¢â‚¬Â and Ã¢â‚¬Å“tremendously powerful communicatorÃ¢â‚¬Â.