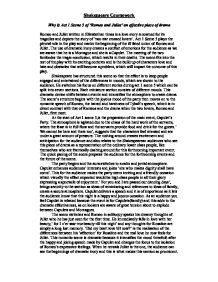 Shakespeare Coursework Why is Act 1 Scene 5 of 'Romeo and Juliet' an effective piece of drama Romeo and Juliet written in Elizabethan times is a love story renowned for its tragedies and depicts the story of 'two star crossed lovers'. Act 1 Scene 5 plays the pivotal role in the play and marks the beginning of the ill fated union of Romeo and Juliet .The use of dramatic irony creates a conflict of emotions for the audience as we are aware that he is a Montague and she is a Capulet. The meeting of the two forebodes the tragic conclusion, which results in their deaths. The scene fits into the rest of the play with its exciting contexts and is the build up of characters love and hate and obstacles that will become a problem, which will impact the outcome of this play. Shakespeare has structured this scene so that the effect is to keep people engaged and entertained of the differences in moods, which are shown to the audience. He switches his focus on different stories during act 1 scene 5 which can be split into seven sections. Each miniature section consists of different moods. This dramatic device shifts between events and intensifies the atmosphere to create drama. The scene's structure begins with the joyous mood of the party then moves on to the romantic speech of Romeo, the hatred and harshness of Tybalt's speech, which is in direct contrast with that of Romeos and the drama when the two lovers, Romeo and Juliet, first meet. At the start of Act 1 scene 5,is the preparation of the main event, Capulet's Party. ...read more.

The sharing of the sonnet symbolises the coming together of the two characters in heart body mind and spirit and they end by finishing each other's sentences. As an audience, their emotions are all over the place conflicting as in one way we want them to get together but at the same time the audience know they are doomed and this is where dramatic irony is at its highest pursuit. Juliet freely engages in conversation by describing Romeo as the God of her idolatry thereby replacing God with Romeo. In effect infatuation is present to the audience and pronouncing that God to some extent sanctioned their love provides the audience in Shakespeare's time with great beliefs in this love and thereby it is compared with their strong religious beliefs, which are pure, innocent and real, like their love for each other. Romeo first suggests that he is unworthy of Juliet's beauty and that to kiss would be a sin,' this holy shrine, the gentle sin is this,' an oxymoron effect as sin is the opposite of gentle which means noble and virtuous, Romeo who possesses these qualities towards Juliet. The scene between them both provides an indication of the roles that each will play in the relationship, Romeo being more dominant as he seduced. Juliet although motionless at first kiss she becomes much more aggressive and starts to mature from a young girl to a mature woman. Using her logic she ensures that Romeo kisses her again in order to take back the sin that he placed on her lips' give me my sin again, you kiss by the book' and in doing this the audience learn that Romeo is proficient or how he has impacted Juliet with his passionate yet innocent infatuated kiss. ...read more.

It emphasises the love versus hate, the families versus each other and the dramatic irony of life versus death. The two themes of love and hate, hate expressed by Tybalt, not only exist throughout the scene and the play but also throughout world and time and this is why the play is so popular because billions can relate to it. Modern day plays are also very similar to Romeo and Juliet, such as the West Side story and is more or less based on the same story line where two lovers, oblivious to the others heritage, fall in love. The scene shows the innocent meeting of two lovers and whether our lives are governed by fate or by our personal choice. It also presents to the audience the drama that lovers are not all responsible for catastrophes they suffer and that we as a modern audience can learn from the characters that we cannot be fully in control of our own lives. This love story and this scene not only shows two people's feelings for one another but about how hate can come in the way between two people or in modern day two different sets of people and how hate can develop because of their family background, or likewise in today's society, separation because of religious beliefs. The play and scene dramatises diversity, combining images of love, violence, religion and family and these issues that pervade Shakespeare's Romeo and Juliet are timeless and for this reason they remain relevant for modern readers. There are may crucial events in act 1 scene 5 and differences in pace, emotion and character combined create the effectiveness of drama, and sets the scene for the rest of histories greatest tale about Romeo and Juliet tragically ending with the harsh reality of death. ...read more.