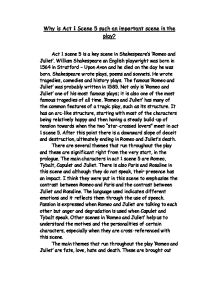 Why is Act 1 Scene 5 such an important scene in the play? Romeo and Juliet

Why is Act 1 Scene 5 such an important scene in the play? Act 1 scene 5 is a key scene in Shakespeare's 'Romeo and Juliet'. William Shakespeare an English playwright was born in 1564 in Stratford - Upon Avon and he died on the day he was born. Shakespeare wrote plays, poems and sonnets. He wrote tragedies, comedies and history plays. The famous 'Romeo and Juliet' was probably written in 1585. Not only is 'Romeo and Juliet' one of his most famous plays; it is also one of the most famous tragedies of all time. 'Romeo and Juliet' has many of the common features of a tragic play, such as its structure. It has an arc-like structure, starting with most of the characters being relatively happy and then having a steady build-up of tension towards when the two "star-crossed lovers" meet in act 1 scene 5. After this point there is a downward slope of deceit and destruction, ultimately ending in Romeo and Juliet's death. There are several themes that run throughout the play and these are significant right from the very start, in the prologue. The main characters in act 1 scene 5 are Romeo, Tybalt, Capulet and Juliet. There is also Paris and Rosaline in this scene and although they do not speak, their presence has an impact. I think they were put in this scene to emphasise the contrast between Romeo and Paris and the contrast between Juliet and Rosaline. ...read more.

Tybalt points out to Capulet that Romeo is present by saying "Tis he, that villain Romeo" and says that he has come "To scorn at our solemnity" showing that Tybalt is enraged that Romeo crept into the Capulet mansion and Tybalt thinks that he has done it to mock them and pick fun at the Capulet household. When Tybalt says that he will fight Romeo, Capulet becomes enraged and says "let him alone", showing that he does not want tension at his party. Capulet does this out of pride, not wanting to cause a scene at his own party as he fears it would bring shame on his family. This unwillingness to cause a fight shows Capulet to also hold his name in high esteem. This is shown by Capulet saying, "I would not for the wealth of this town, here in this house do him disparagement". This shows that to him pride is much more important than his wealth. Tybalt not being able to avenge Romeo at the ball swears vengeance on him. "I will withdraw, but this intrusion shall now seeming sweet, convert to bitterest gall". Tybalt vows to get his revenge on Romeo, knowing that should the two families' fight again their live could be at stake. In Act 1 Scene 1 the Prince says; "If ever you disturb our streets again, your lives shall pay the forfeit of peace". This builds up tension, as the audience are aware of the fact if a fight should occur between the two families, the culprits will be sentenced to death. ...read more.

When Romeo first finds out that Juliet is a Capulet, he reacts by saying "my life is my foe's debt". Meaning that his relationship with Juliet will cost him dearly. This is another example linked back to the prologue where Romeo and Juliet's fate is predicted. It also links to ensure feelings that Romeo had about going to Capulet's party. At the end of Act 1 Scene 4, Romeo confesses how uneasy he is and shows that he thinks that the night at Capulet's party will reveal "some veil forfeit of untimely death". This proves to be correct, like a prophecy. In the very last part of the scene Juliet says, "If he be married, my grave is like to be my wedding bed". Juliet does not know this, but if she does marry Romeo she shall die. In my opinion this scene is important, because the aspects of love, hate, death and fate are occurring all the time throughout the play and I think that those key themes help to hold the play together by linking the scenes and making vital connections. Without this scene it would be hard for the audience to understand many of the character's actions in later scenes. Without this scene, Tybalt would not want revenge on Romeo; therefore Romeo would not end up being banished for slaying Tybalt. This scene is used as the main turning point of the play and is therefore vital. I think this scene is effectively as it sets up a lot tension and keeps the audience interested. ...read more.