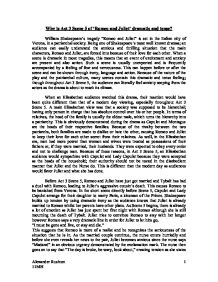 Why is Act 3 Scene 5 of Romeo and Juliet dramatic and tense?

Why is Act 3 Scene 5 of 'Romeo and Juliet' dramatic and tense? William Shakespeare's tragedy "Romeo and Juliet" is set in the Italian city of Verona, in a patriarchal society. Being one of Shakespeare's most well known dramas; an audience can easily understand the anxious and thrilling situation that the main characters, Romeo and Juliet, are forced into because of their love for each other. When a scene is dramatic in most tragedies, this means that an event of excitement and anxiety are present and also action. Such a scene is usually unexpected and is frequently accompanied by a feeling of fear and nervousness. This can happen before or after the scene and can be shown through irony, language and action. Because of the nature of the play and the patriarchal culture, many scenes contain this dramatic and tense feeling; though throughout Act 3 Scene 5, the audience can literally feel anxiety seeping from the actors as the drama is about to reach its climax. When an Elizabethan audience watched this drama, their reaction would have been quite different than that of a modern day viewing, especially throughout Act 3 Scene 5. A main Elizabethan view was that a society was supposed to be hierarchal; having only person in charge that has absolute control over his or her people. In terms of relatives, the head of the family is usually the eldest male, which turns the hierarchy into a patriarchy. This is obviously demonstrated during the drama as Capulet and Montague are the heads of their respective families. ...read more.

The tension begins to increase as Lady Capulet builds up suspense towards Juliet as she describes Paris's qualities before finally breaking the news of their arranged marriage. Juliet responds to this in anger, "Now by Saint Peter's Church and Peter too, He shall not make me there a joyful bride." Juliet's use of blasphemy enhances her anger towards her parents for organizing her marriage. This creates tensions between mother and daughter as Lady Capulet believes that Juliet is over reacting. When Juliet says that Paris will not make her happy, tension is produced as this is the exact opposite reaction that her mother expected from Juliet. As Shakespeare uses an exclamation mark at the end of Juliet's last sentence, "These are news indeed!" her anger and shock are once again demonstrated as the statement is short and also because of the punctuation used at the end of the sentence. Nervousness is created for Juliet as she and the audience both know that she will be disobeying her father if she does not marry Paris. As a result, irony is created throughout this conversation as Juliet misleads her mother on several occasions while the audience actually knows what Juliet means. Furthermore, dramatic tension is created as a result of this irony because Juliet continues to lie about her emotional state. When he first enters the room with the nurse, Capulet is in a good mood as he believes that his daughter will have agreed to marry Paris. ...read more.

At this tense point in the play, the audience can sympathize with Juliet and the situation that she is in as she realizes that she is completely isolated from everyone around her. As the Nurse leaves and Juliet delivers her final soliloquy, Juliet begins to insult the Nurse for allowing her to feel a false sense of security. Juliet informs the audience that she would instead kill herself than wed Paris. Juliet's stubbornness is revealed once again as she refuses to give up on her dream of returning to Romeo. Dramatic irony is created as Juliet delivers her final line of the scene, "If all else fail, myself have power to die." Juliet's dramatic and passionate temperament is once again brought out by her last line as she tells the audience that if she can not have Romeo, Juliet will kill herself. As the audience already know that Romeo and Juliet will die, irony is created for the audience and tension is also added as the scene reaches its end. As a result of Capulet's insulting and demanding nature, the passionate language that Juliet utilizes and the acquiescent behaviour of both the Nurse and Lady Capulet, Act 3 Scene 5 of Shakespeare's 'Romeo and Juliet' is both dramatic and tense. Because of the final soliloquy, the audience realizes that Juliet is going to stop at nothing to get her true love back in her arms. In consequence, the mood of the scene creates a feeling that everything is about to come to a dreadful and unfortunate end for the two young lovers. ?? ?? ?? ?? 1 Alexander Rushton 11MH ...read more.