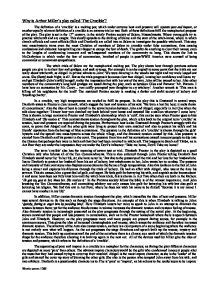 Why is Arthur Millers play called The Crucible?

Why is Arthur Miller's play called 'The Crucible'? The definition of a 'crucible' is a melting pot, which under extreme heat and pressure will separate pure and impure, or another equally relevant definition of a crucible is an extreme trial or test. Both of these definitions fulfil the metaphorical purpose of the play. The play is set in the 17th century, in the strictly Puritan society of Salem, Massachusetts. Where young girls try to practise witchcraft and are caught. This slowly spreads to the shifting of blame and the start of the witch-hunts, where in which church officials and court officials (Hale and Danforth) are called into to Salem to investigate the possible witchcraft. This step into mass-hysteria turns even the most Christian of members of Salem to crumble under false accusations, thus causing confessions and elaborate lies spiralling ever deeper to escape the fear of death. The guilty do anything to clear their names, even to the lengths of condemning innocent and well-respected members of the community to hang. This shows the link to McCarthyism in which under the fear of communism, hundred of people in post-WWII America were accused of being communist or communist sympathisers. ...read more.

Elizabeth Proctor in the play is depicted as a good Christian wife who follows all of the Ten Commandments. This is also enforced through John Proctor telling Danforth that Elizabeth would never lie: 'In her life, sir, she have never lie.' But due to the pressures of the trial and her love for her husband she lies to Danforth to protect her husband from his act of lechery, but unbeknown to her, John wants her to confess. The pressure and intensity of this court scene also displays connections to the theme of high temperatures. Also this leads on to the fact of John being a sinner and explores his dilemma through the trials of lechery. He had an affair with Abigail, who was at the time his servant. This sin causes John a great deal of guilt, and regret. He feels guilt for betraying his wife, and anguish as she knows about it and some how does not fully trust him until the witch hunt trials, this is shown in Act Two when they are both in the kitchen: 'He gets up, goes to her, kisses her. She receives it.' In the Puritans society follow the bible is of the utmost importance. ...read more.

John Proctor is an ambiguous character as he is impure in the sense that he sinned in committing adultery, but all throughout the play his character is quite pure, as he defends his wife and friends again false accusations, and in the end dies to prove the point of the court being wrong. So in a way he dies a martyr and 'rises to the top of the crucible'. But there is a sense on irony in this metaphor as in the end of the play; the court and the girls (impure) are the people who are left untouched and unaccused, but the pure characters such as John and Rebecca and the other innocent people who were charged ended up hanged and dead. This suggests that somewhat the impure should rise to the top of the crucible and the pure should sink to the bottom. In conclusion, the definition of a 'crucible' directly shows a metaphorical link to many parts and emotive features of the play. The play was called 'the Crucible' because of the clear relevance to most of the themes and issues that the play explores. The title is very effective due the fact it is provocative and encourages you to reflect on the play, its meaning and also its contemporary truth. Words count: 1269 ...read more.