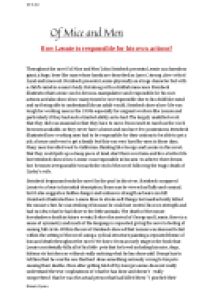 Why is Lennie responsible for his own actions in &quot;Of Mice And Men&quot;?

﻿17.3.13 Of Mice and Men How Lennie is responsible for his own actions? Throughout the novel ?of Mice and Men? John Steinbeck presents Lennie as a harmless giant, a huge, bear-like man whose hands are described as ?paws?, strong ,slow witted ,loyal and innocent. Steinbeck presents Lennie physically as a huge character but with a child?s mind in a man?s body. But along with a childish innocence Steinbeck illustrates that Lennie can be devious, manipulative and responsible for his own actions and also shows how many times he is irresponsible due to his child like mind and not being able to understand like an adult would. Steinbeck shows how life was tough for working men in the 1930s especially for migrant workers like Lennie and particularly if they had such a limited ability as he had. The largely unskilled work that they did was seasonal in that they have to move from ranch to ranch as the work becomes available, so they never have a home and can have few possessions. Steinbeck illustrated how working men had to be responsible for their actions to be able to get a job, a house and even to get a family but this was very hard for men in those days. Many men travelled west to California ,thinking like George and Lennie in the novel, that they could pick up a cheap piece of land, start their own farm and live a better life but Steinbeck shows how Lennie was responsible in ...read more.

Curley ended up with a broken arm as a result of an altercation with Lennie . Again Lennie was demonstrating that he had no control or understanding of the effect of his physical strength . This demonstrated that Lennie?s irresponsibility stopping was due to his misunderstanding of how he could hurt animals or people due to his learning disability. Lennie is completely oblivious to the dangers of the world and the power of his great physical power always holding on to the dream of someday owning a farm with his best friend George, this was his dream and wa all he could think about. Lennie does not understand his own physical strength and also lacks the understanding of what is socially acceptable behaviour. Lennie was just like a big baby, like a huge gentle giant. He had no ability to defend himself and could not be held responsible for his actions. This irresponsibility, combined with his abnormal size and strength, causes many of the other ranch hands to shy away and fear him. Throughout the early chapters we can see clear evidence of George and Lennie?s friendship. This is initially portrayed in chapter one whereby George is portrayed by Steinbeck as a father like figure to Lennie the child like figure ?Lennie for god?s sakes, don?t drink so much? Lennie was drinking lots of dirty water and could not be responsible for his actions . ...read more.

if something bad is going to happen due to his strength but Lennie calmed down and was responsible for his own actions. Steinbeck used a lot of animal imagery throughot the novel towards Lennie. Lennie is often compared to a bear with his huge size and strength. His hands are described as paws, and he is always associated with rabbits and mice. He snorts like a horse at the stream and circles like a terrier when he does not want to bring the dead mouse to George. Steinbeck used these animal images to foreshadow what would happen towards the end of the novel. With his enormous strength and his lack of intelligence, common sense, and responsibility, Steinbeck shows the reader how he wouldn?t be able to cope with life and take responsibility by himself. Overall Steinbeck showed how Lennie can be responsible for his actions by being able to work as a ranch worker due to his strength and was responsible when he did everything that George told him to do But on the other hand Steinbeck illustrated how many times he was irresponsible at first he killed a mouse and broke Curleys hand and became more irresponsible towards the end killing the dog and then Curleys wife this showed how dangerous he was but Steinbeck exemplified how Lennie did not mean for any of this to happen and showed how he didn?t understand his how strong he was due to his disability and his child like mind. Niamh Quinn ...read more.