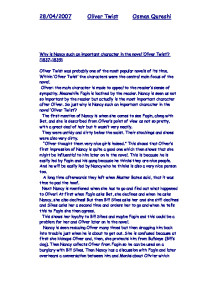 Why is Nancy such an important character in the novel 'Oliver Twist'? {1837-1839} Oliver Twist was probably one of the most popular novels of its time. Within 'Oliver Twist' the characters were the central main focus of the novel. Oliver: the main c...

Why is Nancy such an important character in the novel 'Oliver Twist'? {1837-1839} Oliver Twist was probably one of the most popular novels of its time. Within 'Oliver Twist' the characters were the central main focus of the novel. Oliver: the main character is made to appeal to the reader's sense of sympathy. Meanwhile Fagin is loathed by the reader. Nancy is seen as not so important by the reader but actually is the most important character after Oliver. So just why is Nancy such an important character in the novel 'Oliver Twist'? The first mention of Nancy is when she comes to see Fagin, along with Bet, and she is described from Oliver's point of view as not so pretty, with a great deal of hair but it wasn't very neatly. They were untidy and dirty below the waist. Their stockings and shoes were also very dirty. "Oliver thought them very nice girls indeed." This shows that Oliver's first impression of Nancy is quite a good one which then shows that she might be influential to him later on in the novel. This is because he is easily led by Fagin and his gang because he thinks they are nice people. And he will be easily led by Nancy who he thinks is also a very nice person too. ...read more.

She also gains sympathy for the way she dies in the novel. When she meets Brownlow and Rose, Dickens builds up the sense that something evil is about to happen, because he sets the scene at midnight when there is mist, church bells, coffins, and it's deserted, everyone ignoring each other. This sets the scene showing that there is going to be a death. Noah Claypole hears the meeting between Nancy and Rose and reveals all to Fagin. Fagin lets Sikes know about Nancy's double-dealing and Sikes is far from pleased. Fagin cleverly winds up Sikes knowing his reaction and this shows that Fagin is evil because he wants Nancy dead and that he can get her killed by Sikes. This also shows that the relationship with Fagin and his thieves is like that of brothers, because Fagin can make them do basically what he wants. Later on Nancy returns home and falls asleep. When she is woken by Sikes she is actually pleased to see him. This is because she thinks she's done nothing wrong because, even though she told Rose the truth, she never gave away their hiding place and names of the thieves. This shows her in a good light as she thinks what she has done is right, and this, builds up support for Nancy at this part of the novel. ...read more.

The readers also sympathise with Nancy because she seems very nice compared to others such as Fagin and Sikes. This is because even though she seems double-sided she comes through in the end on the side of good whilst Fagin is planning to poison one of his own people: Bill Sikes. They also empathise with her because of the brutality and harshness she receives from Sikes. And then she allies herself with people such as Mr. Brownlow and Rose who are really kind to a boy (Oliver) who tried to rob them which shows Nancy is on the same side as them( the side of good). So why is Nancy such an important character in the novel Oliver Twist? The main reason Nancy is such an important character is because she risks her life to save Oliver and goes through many hardships and brutalities to ensure that Oliver stays alive and doesn't get dragged into the criminal underworld that she hates and doesn't wish to be part of! It is a typical 'good VS evil' scenario and when good prevails the reader really enjoys this. This is what is happening with Nancy, she represents good in a struggle with Fagin and Sikes who represent evil. She dies but for a just cause, when she frees Oliver from the criminal underworld and lets him know about his undiscovered riches. So that is why Nancy is such an important character in the novel 'Oliver Twist'. ?? ?? ?? ?? 28/04/2007 Oliver Twist Osman Qureshi ...read more.