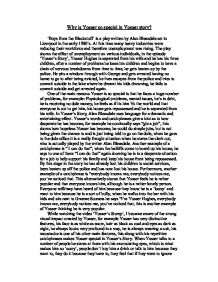 Why is Yosser so special in Yosser story? 'Boys from the Blackstuff' is a play written by Alan Bleasdale set in Liverpool in the early 1980's. At this time many heavy industries were reducing their workforce and therefore unemployment was rising. The play shows the effect of unemployment on various individuals, in the episode 'Yosser's Story', Yosser Hughes is separated from his wife and he has his three children, after a number of problems he loses his children and begins to have a chain of nervous breakdowns from time to time, he gets beaten up by the police. He pits a window through with George and gets arrested having no home to go to after being evicted, he then escapes from the police and tries to commit suicide in the lake where he dreamt his kids drowning, he fails to commit suicide and get arrested again. One of the main reasons Yosser is so special is that he faces a huge number of problems, for example: Physiological ...read more.

Everyone will/may have heard of him because they know he is a 'loony' and react to him because he is a sort of bully, when he walks into the bar with his kids and sits next to Graeme Souness he says "I'm Yosser Hughes, everybody knows me, everybody notices me, you've noticed that, this is another example of Yosser thinking he is very popular. While watching the video 'Yosser's Storey', I became aware of the strong visual impact created by Yosser, for example Yosser has very distinctive features, his face is as white as snow, hair as black as coal and eyes as dark as night, he always looks very profound in a way, he is always wearing a suit, his moustache is one of his other main features, this along with his repetitive catchphrases makes Yosser special in Yosser's Story. When Yosser talks to a number of people he stares at them with his excruciating eyes, which is what makes him so 'scary', people don't buy him ...read more.

Another of the ways in which Bleasdale makes Yosser special is by the use of dramatic and linguistic devices, for example, when Yosser repeatedly uses his catchphrases "I'm Yosser Hughes" and "giz a job", these are uses of linguistic devices. An example of uses for dramatic devices is when the police come to get Yosser out of the way so that social services can take his children it al goes quiet and into slow motion, as they are fighting, Yosser dives on top of one of the police officers and head butts him/her, this is also an example of juxtaposition. What makes Yosser so special for me is the repetition of his catchphrases "giz a job" and "I can do that". Another feature which makes Yosser so special is his facial expressions and his distinctive features, the way in which Bleasdale has obviously had a great deal of time taken to prepare and create his image. Shane Lightfoot English Mr. Fowler 11BV-11T2 ...read more.