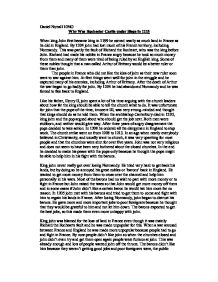 Why Was Rochester Castle under Siege in 1215?

Daniel Nuttall 10NO Why Was Rochester Castle under Siege in 1215 When king John first became king in 1199 he owned nearly as much land in France as he did in England. By 1204 john had lost much of his French territory, including Normandy. This was partly the fault of Richard the lionheart, who was the king before John. Richard had made his nobles in France angry because he took so much money from them and many of them were tired of being ruled by an English king. Some of these nobles thought that a man called Arthur of Brittany would be a better ruler or them than john. The people in France who did not like the idea of john as their new ruler soon went to war against him. At first things went well for john in the struggle and he captured many of his enemies, including Arthur of Brittany. After the death of Arthur the war began to go badly for john. By 1204 he had abandoned Normandy and he was forced to flee back to England. ...read more.

In 1205 john met with his barons and tried to get them to come and fight with him to regain his lands in France. After losing Normandy, john began to distrust his barons. He gave more and more important jobs to poor foreigners because he thought that they would be grateful to him and not let him down. The barons expected to get the best jobs, so this made them even more unhappy with john. King john was blamed for the loss of land in France even though it was mainly Richard the lionhearts fault and he was made unpopular for this. When a war aroused between France and England he was made more unpopular because people had to go and fight in France. By now people didn't like john so when the churches closed and john didn't even try and get them open again people were furious at john. This was already enough and lots of people wanted john off the throne. The barons didn't like him because they weren't getting good jobs and poor foreigners were, the public didn't like him because he lost a lot of land in France and because he at war with France. ...read more.

John need the pope because this period of time was very religious so to be popular he needed to be on the pops side so eventually the king gave in and Langton was appointed and it is believed that he took custody of Rochester castle. King John didn't like Langton taking Rochester castle because he was on the side of the barons who had already rebelled. As Rochester castle was a strategic position he didn't want this to be a baron stronghold. Before king john signed the Magna Carta there was a great unrest in the country. Many people did not believe that john could run the country. On the 25th of May 1215 king john asked that the castle be handed over to a royal constable and be returned to the archbishop only when the country was at peace again. On the 15th of June 1215, soon after the signing of the Magna Carta the castle was restored to Langton. But when the civil war broke out again the king told Langton to return to the original agreement and to transfer the castle to the bishop of Westminster, royal supporter. This time Langton refused to move out of the castle. Then the 2nd civil war started. ...read more.