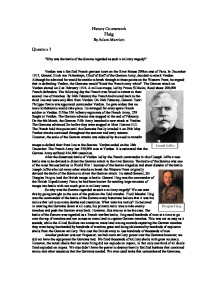 'Why was the battle of the Somme regarded as such a military tragedy?'

History Coursework Haig By Adam Marriott Question 1 'Why was the battle of the Somme regarded as such a military tragedy?' Verdun was a fortified French garrison town on the River Meuse 200km east of Paris. In December 1915, General Erich von Falkenhayn, Chief of Staff of the German Army, decided to attack Verdun. Although he admitted he would be unable to break through at these points on the Western Front, he argued that in defending Verdun, the Germans would "bleed the French army white". The German attack on Verdun started on 21st February 1916. A million troops, led by Prince Wilhelm, faced about 200,000 French defenders. The following day the French was forced to retreat to their second line of trenches. By 24th February the French had moved back to the third line and were only 8km from Verdun. On 24th February, General Henri Philippe Petain was appointed commander Verdun. He gave orders that no more withdrawals would take place. He arranged for every spare French soldier to Verdun. Of the 330 infantry regiments of the French Army, 259 fought at Verdun. ...read more.

However, this was no to be the case. The battle of the Somme was regarded as a Trench warfare battle, Haig used hundreds of men at a time to go over the top of trenches and run across no mans land to capture German trenches. This was not as easy as it sounds, while the Allied Soldiers ran across no mans land aiming towards capturing the German trenches they were being bombarded by hundreds of machine guns and being obliterated by hundreds of explosive shells from the German artillery. This cost the British army to lose hundreds of thousands of men. Another problem was our firepower; we had more artillery power over the Germans however, we did not have the equipment the Germans had. We fired thousands of artillery shells with great accuracy. However, the actual shells that we were firing did not explode on impact, in fact only one third of all shells fired exploded on impact. We also didn't have the power to destroy heavily fortified bunkers that contained ammo and other resources that the Germans needed. We even used tanks that outnumbered the Germans, but our tanks were extremely unreliable and were not suited for trench warfare. ...read more.

However, this was not the case, we captured loads of German trenches at one point but we didn't have the manpower to send more troops to defend the trenches that we had captured. We didn't have the communication to request reinforcements for captured trenches and we didn't have the resources to defend the trenches that we captured. This resulted in a yo-yo effect; while we were pushing and capturing German trenches the Germans were bombarding the newly captured trenches and capturing them back. Through all the gloom and doom of the battle of the Somme there were some plus points at the end of the battle we had sorely weakened the German army and we had worn down the German morale. Historians believe that the German army was never the same. To conclude even though the battle of the Somme was a military success the lead up to the success endured many tragedies. With 60,000 British casualties and 20,000 dead on the first day and 420,000 dead with 190,000 French dead people could say it was the most costly battles in history. However, with 650,000 Germans dead people may also say it wasn't such a tragedy after all. ...read more.