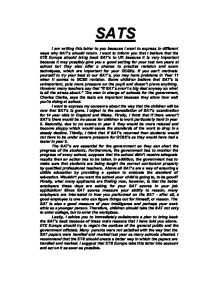 Why we should still sit the SATS.

SATS I am writing this letter to you because I want to express in different ways why SAT's should return. I want to inform you that I believe that the ETS Europe should bring back SAT's to UK because it is very important because it may possibly give you a good setting for your last two years at school but they also offer a chance to practise revision and exam techniques, which are important for your GCSEs. If you can't motivate yourself to try your best at our SAT's, you may have problems in Year 11 when it comes to GCSE revision. Some children believe that SAT's is unimportant, puts more pressure on the pupil and doesn't prove anything. ...read more.

Secondly, due to no exams in year 9 they would be more relaxed and become sloppy which would cause the standards of the work to drop in a steady decline. Thirdly, I think that if SAT's returned then students would not have to be under severe pressure for GCSE's as they would have had a taster in year 9. The SAT's are essential for the government so they can chart the progress of the students. Furthermore, the government has to monitor the progress of every school, suppose that the school didn't receive adequate results then an action has to be taken. In addition, the government has to make sure that students are being taught the correct curriculum properly by qualified professional teachers. ...read more.

The SAT is also a good measure of your intelligence and perhaps your work ethic as a younger person. Therefore, children should take the SAT not only to enter college, but to enter the workplace. Lastly, I advice you to immediately collaborate a plan to bring back the SAT's back because of these main reasons that I have told you above. ETX Europe should try to regain the confuse of the general public and the government officials. Many parents were not satisfied with the way that the SAT papers were handled and marked last year as many schools cheated. I recommend that the ETS should create a better way in which the papers are handled and marked. I suggest that ETS Europe take this letter into account and act on it as soon as possible. ...read more.

An interesting response, the candidate makes a number of efforts to persuade the return of the once-obligatory SATs tests to the UK education system. However, a lot of their efforts are wasted on poor logic and this gives the indication ...

An interesting response, the candidate makes a number of efforts to persuade the return of the once-obligatory SATs tests to the UK education system. However, a lot of their efforts are wasted on poor logic and this gives the indication that the candidate has not done the proper research on the topic. For instance - "Therefore, children should take the SAT not only to enter college, but to enter the workplace." Children eligible for SATs tests are not eligible for work as SATs are taken under the legal working age of 16. And it is errors like this, coupled with grammatical errors that see the candidate chucking out all possible arguments in one sentence, that hinder the essay and prevent it from achieving more than a low C grade for GCSE.

The Level of Analysis here is poor for one reason - the candidate isn't entirely clued up on the SATs system or the reasons the government felt they should be dropped from obligatory assessments. Whether or not you agree with this move, it is vitally important to know the facts, because how can you persuade someone into something based on ill-informed logic? There must be external research conducted here, and a far deeper analysis into the benefits of the SATs examinations other than "they prepare you for other exams", because GCSE mock exams (sat by Year 10s and 11s) are designed for that and would have much greater impact due to being closer to the real GCSE examinations than the SATs, which are/were taken in primary schools/Year 9.

Also, if the candidate backed their points up more ("The SAT is also a good measure of your intelligence"), then they would find that the analysis becomes much less forced. How can you objectively say SATs measure intelligence when, much like all other formal examinations, they are subject to enormous criticism about being hugely prescriptive and an invalid measure of a student's full academic and - particularly - vocational potential.

The Quality of Written Communication is consistently just below average. The candidate writes, even when quoting "teachers", sentences like "If SAT's aren't a big deal anyway so what is all the stress about." - no question mark and the grammatical syntax is wrong as well. These errors are minor but they snowball throughout the answer and mustt be rectified.