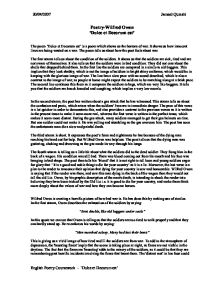 Poetry-Wilfred Owen 'Dulce et Decorum est' The poem 'Dulce et Decorum est' is a poem which shows us the horrors of war. It shows us how innocent lives are being wasted on a war. The poem tells us about how the poet feels about war. The first stanza tells us about the condition of the soldiers. It shows us that the soldiers are sick, tired and are not aware of themselves. It also tells us that the soldiers were in bad condition. They did not care about the shells that dropped behind them. In the first line the soldiers are compared in a simile to old beggars. This implies that they look shabby, which is not the image of soldiers in bright shiny uniforms, which would be in keeping with the glorious image of war. The line has a slow pace with no sound described, which is also a contrast to the image of war, as people at home might expect the soldiers to be marching along at a brisk pace. The second line continues this them as it compares the soldiers to hags, which are very like beggars. ...read more.

Wilfred Owen is also making use of metaphors to strengthen the lines of his poem. In the second stanza, Owen tells us about a dying man when he inhaled the gas. "But someone was yelling out and stumbling And floundering like a man in fire or lime" From this quote, we get a picture of how the dying man felt just as he had inhaled the smoke. Wilfred Owen has made use of other literary techniques such as Direct speech, Alliteration and Onomatopoeia. In the second stanza, Owen has made use of direct speech to give the reader a realistic feeling about what is happening in the poem. "Gas! Gas! Quick, boys!" The poet has also made use of Alliteration. In the third stanza, the poet says: "Behind the wagon we flung him in, And watch the white eyes writhing in his face" Here the poet is telling us about the state in which the dying man was. The poet has also made use of two special features, enjambement and caesura. Wilfred Owen has made use of enjambement very often from the second stanza. ...read more.

This tells us he does not believe this statement to be true. The poem is filled with horrible stories about what really happened, and so Wilfred Owen is saying how can all of this suffering be sweet and proper? In my opinion, I do not like the poem very much. It gives a very horrific image of war. Although Wilfred Owen is right about 'Dulce et Decorum est Pro Patria Mori' I still think that the poem is written quite harshly. The language used by the poet is not bad but the content is. The examples that Wilfred Owen has given us of warfare are very horrific. A man drowning in a gas of poisonous gas, a group of soldiers in ill condition etc, all this reflects upon the horrific accounts of warfare. If the poet were trying to stress his point through non-horrific examples, then the poem would've been a lot more enjoyable. But that doesn't mean I am criticizing the poet. Needless to say the poem is very well written. Its what the poet feels about warfare, which obviously I wouldn't criticize that at all as it is the poet's opinion. 30/04/2007 Jameel Qureshi English Poetry Coursework - 'Dulce et Decorum est' ...read more.