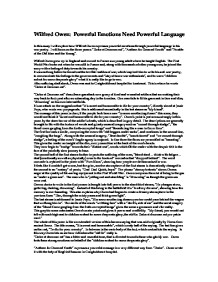 Wilfred Owen: Powerful Emotions Need Powerful Language In this essay I will explore how Wilfred Owen expresses powerful emotions through powerful language in his war poetry. I will focus on the three poems "Dulce et Decorum est", "Anthem for Doomed Youth" and "Parable of the Old Man and the Young". Wilfred Owen grew up in England and moved to France as a young adult where he taught English. The First World War broke out when he was still in France and, along with thousands of other young men, he joined the army with a feeling of duty towards his country. It was not long before he found out the terrible realities of war, which inspired him to write his anti war poetry, to communicate his feelings to the governments and "stay at home war enthusiasts", and to warn "children ardent for some desperate glory" what it is really like to go to war. After suffering shell shock, Owen was sent to Craiglockhheart hospital for treatment. This is where he wrote "Dulce et Decorum est". "Dulce et Decorum est" describes a gas attack on a group of tired and wounded soldiers that are making their way back to their post after an exhausting day in the trenches. One man fails to fit his gas mask in time and dies, "drowning" on his own internal fluids. It is an attack on the suggestion that "it is sweet and honourable to die for your country", directly aimed at Jessie Pope, who wrote war propaganda. ...read more.

"Anthem for Doomed Youth" expresses a powerful message in a very different way from "Dulce". Owen wrote it with the help of Siegfried Sassoon in Craiglockheart hospital. "Anthem" compares the deaths of soldiers in battle with middle to upper class funerals of the period. It is a sonnet, which is a fourteen line poem, most commonly used to describe nature or as a love song. Using the sonnet form gives the poem a bitter irony, which is its general tone along with a strong feeling of pathos. The rhyming is made up of perfect and half rhymes and is structured AB AB CD EF FE GG, in typical Shakespearean sonnet form. The poem is made up of a series of comparisons. "Passing bells" are compared with the "rapid rattle" of the "guns", "choirs" with the "wailing shells" and "bugles" from "sad shires". The "candles" with the "glimmers" of tears in the eyes of the bereaved, the "pall with the "pallor of girls' brows". The "flowers [with] the tenderness of patient minds", and "the drawing down of blinds" with "each slow dusk". "Anthem" is written in the third person, which gives it a misty distance. It takes us from the battlefield to the funeral and then to the village in mourning which, along with the distance, gives an epic feel. The octave begins with a question that introduces us to the theme of the poem and invites our curiosity. "Those who die as cattle" dehumanises the soldiers and shows how much respect the authorities really have for them: as much as they would respect cows in a slaughterhouse. ...read more.

Instead of building an altar Abraham "builded parapet and trenches there". The fundamental flaw of Abraham in "The Parable" (symbolised in the structure) is symbolic of the breaking and ignoring of ancient wisdom. When Abraham is proved to be faithful and the angel announces "lay not thy hand upon the lad", we are filled with hope, giving the last two lines a bitter bathos. The message of this poem is that our society has not learned from past mistakes and ignores ancient teachings of wisdom. The power of this message lies in tragic metaphors. It is clear from his poetry that Owen feels disgusted by humanity's atrocities, and by those who create and promote them. He also feels great pity and compassion for the suffering that is caused by war. In these three poems structure plays and important role. In "Dulce" the confused and broken up stanzas obliterate conventional forms and are symbolic of the contorted, deranged scene of human cruelty they describe and the poem's revolutionary anti-establishment message. "Anthem" fills the conventional sonnet form with unexpected comparisons that create a tone of bitter irony and resentment towards the authorities as well as bitter sadness. "The Parable" splits from the sonnet form in the last two lines, showing the arrogance of the establishment and their deliberate ignorance of ancient wisdom. Wilfred Owen skilfully crafts language, form and symbolism in these three poems. His emotions about war are powerfully expressed in his work and communicate a message that demands the reader's empathy. Nothing (apart form circumstances) has changed since Owen's day and his message is still fully valid as an urgent wake-up call for humanity. Word Count: 1,991 Peter Woodman ...read more.