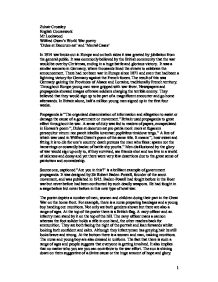 Zuhair Crossley English Coursework Mr Lockwood Wilfred Owen's World War poetry 'Dulce et Decurum est' and 'Mental Cases' In 1914 war broke out in Europe and on both sides it was greeted by jubilation from the general public. It was commonly believed by the British community that the war would be over by Christmas, ending in a huge battle and glorious victory. It was a similar scenario in Germany, where thousands lined the streets to celebrate the announcement. There had not been war in Europe since 1871 and even that had been a lightning victory for Germany against the French forces. The result of this was Germany gaining the Provinces of Alsace and Lorraine, traditionally French territory. Throughout Europe young men were gripped with war fever. Newspapers and propaganda showed images of brave soldiers charging the terrible enemy. They believed that they would sign up to be part of a magnificent encounter and go home afterwards. In Britain alone, half a million young men signed up in the first four weeks. Propaganda is "The organised dissemination of information and allegation to assist or damage the cause of a government or movement." Britain used propaganda to great effect throughout the war. A sense of duty was fed to readers of papers, encapsulated in Horace's poem ", Dulce et decorum est pro patria mori: mors et fugacem persequitur virum: nec parcit inbellis iuventae: poplitibus timidove tergo." A line of which was used in Wilfred Owen's poem of the same title. It means ", how sweet and fitting it is to die for one's country: death pursues the man who flees: spares not the hamstrings or cowardly backs: of battle shy youths." Men disillusioned by the glory of war would sign up only to, if they survived, see friends shot and too live in a world of sickness and decay and yet there were very few desertions due to the great sense of patriotism and comradeship. ...read more.

Also, the image created is that the soldiers suddenly move very quickly, despite their fatigue. Alliteration is then used in the next line to emphasise that there is just one person left, making hysterical movements. 'Someone still was yelling out and stumbling.' This creates the impression that the soldier is in a severe state of panic. The writer then uses the simile 'As under a green sea I saw him drowning.' This portrays the image that the soldier is really suffering and struggling to a horrendous death that definitely isn't a 'sweet,' way to end one's life. The reader can imagine a man slowly sinking into thick, deep water as he violently moves about, but nothing can be done. It also helps to create a surreal feel to the poem. This surreal feel is particularly established by Owen's continued use of metaphors when describing the atrocious scene. Also all of this is under a green light from the gas suggestive of an alien atmosphere. The penultimate stanza is reflective, as if the writer has taken a step back and surveyed the situation. He describes his sight as being 'helpless,' and that he couldn't help his comrade at all. Now he feels guilty that he couldn't do anything and is haunted by the man's final moments "in all [his] dreams." Additionally, it creates the impression that the writer himself was in a dangerous situation. The image that is formed is that the scene is very chaotic, disorderly and confusing. Owen then uses the word 'plunges,' to illustrate the image that the suffering soldier tries to make one final attempt to be saved. The sounds 'guttering, choking, drowning' are then used to highlight the point that the soldier truly is experiencing a ghastly death and he is in tremendous pain. These words, once again in the past continuous tense, are used to really emphasise the pain that he is suffering and that he was making these revolting sounds. ...read more.

He will never feel love or live life to the full again. Though sleep is relief from his tortuous life in 'Disabled', sleep becomes a hell for many of the poems. In 'Dulce et Decorum Est'-'In all my dreams . . . He plunges at me' and in 'The Sentry' the persistent memories-'I try not to remember these things now'. The detail in Owen's poetry puts forward his scenes horrifically and memorably. His poems are suffused with the horror of battle, yet finely structured and innovative. 'His bleeding cough'- a scene unimaginable by us, something only a true witness would see and' puckering foreheads crisp'- more than frozen to death, Owen acutely describes the impact on the skin and face. The scene witnessed by Owen is so detailed we feel familiar to it ourselves. As with the unseen scars, Owen delves beneath the surface of cover ups and expectations. As in 'Disabled' and 'S.I.W.', the full horror behind these unemotional terms is described. The particular techniques adopted by Owen in his poetry underline his messages. His use of speech and present tense give his poems urgency and directness. All the senses are utilised by Owen, a constant input of sound, smell, touch as well as sight increase the dimensions of his images and overwhelm us as he must have been. Owen's appliance of half-rhyme gives his poetry a dissonant, disturbing quality that amplifies his themes. His stanzas jar, as war does. So many of Owen's poems bring across poignant themes and images, which stay in the mind long after having read them. He tells his experiences and opinions with such clarity and beauty- adding to the poignancy as war is so ugly and confused. I love to read his poems over many times, because each time I notice some new cleverness or point unseen before. His ability to pin point certain images and moments makes the moments recognisable, even to those who have never experienced war. He attempts to connect war with other aspects of human suffering, making him much more than simply a war poet. ?? ?? ?? ?? 1 ...read more.