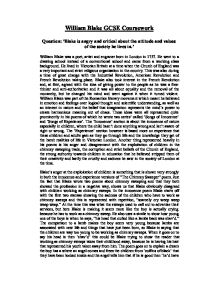 William Blake - Blake is angry and critical about the attitude and values of the society he lives in.(TM)

William Blake GCSE Coursework Question: 'Blake is angry and critical about the attitude and values of the society he lives in.' William Blake was a poet, artist and engraver born in London in 1757. He went to a drawing school instead of a conventional school and came from a working class background. He lived in Victorian Britain at a time when the Church of England was a very important and strict religious organisation in the country. This was also during a time of great change with the Industrial Revolution, American Revolution and French Revolution taking place. Blake also took interest in the French Revolution and, at first, agreed with the idea of giving power to the people as he was a free-thinker and anti-authoritarian and it was all about equality and the removal of the monarchy, but he changed his mind and went against it when it turned violent. William Blake was part of the Romantics literary movement which meant he believed in emotion and feelings over logical thought and scientific understanding, as well as an interest in nature and the belief that imagination represents the mind's power to create harmonious meaning out of chaos. These ideas were all represented quite prominently in his poems of which he wrote two series' called 'Songs of Innocence' and 'Songs of Experience'. The 'Innocence' section is about the innocence of nature especially in children, where the child hasn't done anything wrong and isn't aware of right or wrong. The 'Experience' section however is based more on experience that these children and adults gain as they go through life and the knowledge they get of the harsh realities of life in Victorian London. ...read more.

Here I think Blake is trying to show the reader the hypocrisy that he sees in the church of England because the parents are praying at church whilst they have abandoned their son to chimney sweeping. And he has twisted the idea of heaven, which is thought to be a good place, to a miserable one. This poem shows that the child has experience because he doesn't have the false hope of the child in the innocence version and he sees the church of England as how Blake feels it actually is. It is similar to the innocence version in that both show the misery and pain the chimney sweeping causes the children and Blake shows the reader in both that he feels the parents and partially the church of England are partly to blame for it. Another thing that appears in both is a lot of symbols and metaphors that are used by Blake to emphasize the points he is trying to make and to give the reader a better picture of what the children are experiencing. I have already spoken of how Blake is critical of religion, especially the Church of England and this is shown more clearly in the innocence and experience versions of 'Holy Thursday'. In the innocence poem a crowd of children are entering St. Paul's Cathedral to sing praise. In the experience poem the speaker talks about the misery and poverty he sees the children and people in general experiencing around him. In the innocence poem Blake shows the reader that the church of England is quite hypocritical because, at the end of the poem, it says, 'beneath them sit the aged man, wise guardians of the poor.' ...read more.

Another thing that 'The Little Vagabond' poem does is give us insight in to how Blake saw the Britain that he lived in. The boy talks about how the church isn't a very nice place to visit and of how the ale house is a lot more welcoming and happy. The boy says, 'and modest Dame Lurch, who is always at church,' which tells us that the boy thought the church was very strict and possibly cruel towards children. This would have been quite shocking at the time because religion was a big part of life and Blake is saying that ale houses were better places to be than churches. The last stanza would also have been seen as rather shocking at the time because the boy says, 'And God...would have no more quarrel with the devil or the barrel, but kiss him and give him both drink and apparel.' Here the boy is suggesting that the church should be a more harmonious place and not be as strictly against things like alcohol and should instead promote reconciliation because that is what a loving God would want. However, people living in Britain at the time would have been surprised and very possibly angered by this idea of God become almost friend's with the devil and giving him clothes and drink because the church of England at the time was very sternly against sinning and alcohol consumption. I think the boy's idea of a more welcoming church is one that Blake believes well never happen as it is being portrayed as the wishful thinking young children have and it is a false hope and Blake is criticising he church for this; similarly to how he criticised the hypocrisy of the church in the two Holy Thursday poems. ...read more.