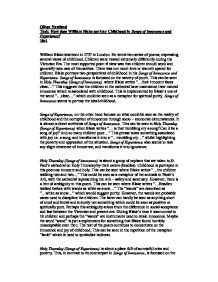 Oliver Newland Task: How does William Blake portray Childhood in Songs of Innocence and Experience? 10c1 William Blake was born in 1757 in London. He wrote two series of poems, expressing several views of childhood. Children were treated extremely differently during the Victorian Era. The most supported point if view was that children should work and generally take care of themselves. There was not much love or warmth spared for children. Blake portrays two perspectives of childhood in his Songs of Innocence and Experience. Songs of Innocence is focussed on the naivety of youth. This can be seen in Holy Thursday (Songs of Innocence) where Blake writes "...their innocent faces clean..." This suggests that the children in the cathedral have maintained their natural innocence which is associated with childhood. This is implemented by Blake's use of the word "...clean..." which could be seen as a metaphor for spiritual purity. Songs of Innocence seems to portray the ideal childhood. Songs of Experience, on the other hand focuses on what could be seen as the reality of childhood and the corruption of innocence through socio - economic circumstances. ...read more.

The sun seems to represent joy in this poem, and the rain, growth and nourishment. The land and the children in this poem are deprived of these things, both literally and figuratively. The gap between the ideal childhood and the reality of childhood are most pronounced and distinct in these contrasting poems and it is highlighted using metaphorical language and figurative questions, which reveal underlying facts. The Chimney - Sweeper (Songs of Innocence) is about a child that was sold to the chimney sweepers when he was very young. He witnesses another child - Tom Dacre - having a dream or vision in which there are thousands of dead chimney sweepers; then an angel appears telling him that if he is good he will "...have god as your father and never want joy..." Though this might seem miserable and morbid at first, with the boys "...locked up in coffins of black..." , the effect is later reversed by the apparition of the angel. The angel unlocks the coffin with a "...bright key..." which could be seen as the key to life or the key to the gates of heaven. ...read more.

This suggests that the nurse does not approve of the children having fun and enjoying themselves, which is essentially what children do during their early years. I think that she disapproves so much because she fears that the children's innocence will lead them into danger. This is supported by the phrase that Blake writes in the first stanza "...And whisperings are heard on the dale..." this creates a sense of danger and trouble in my mind. I think the nurse senses this danger to her own experience. Blake also suggests that the children's desire for freedom should be disguised. This can be seen where he write "...And your winter and night in disguise..." This suggests that the children should repress their desire for playing and having fun. The nurses own experiences, which are clearly undesirable, largely influence Blake's portrayal of childhood in this poem. Nurse's Song (Songs of Innocence) is also about a nurse watching her charges play outside. However, this nurse approves of the children's enjoyment and is contented by the fact that they are happy. This can be seen where Blake writes "...My heart is a rest within my breast..." This shows us that the nurse is pleased that the children are enjoying their childhood. Childhood is portrayed as a time of joy and cheerfulness in this poem. ...read more.