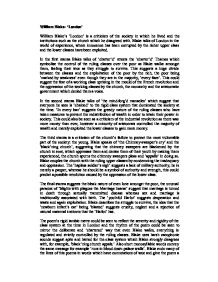 William Blake's 'London' is a criticism of the society in which he lived and the institutions such as the church which he disagreed with.

William Blake- 'London' William Blake's 'London' is a criticism of the society in which he lived and the institutions such as the church which he disagreed with. Blake talks of London in the world of experience, where innocence has been corrupted by the richer upper class and the lower classes have been exploited. In the first stanza Blake talks of 'charter'd' streets the 'charter'd' Thames which symbolise the control of the ruling classes over the poor as Blake walks amongst them, feeling their woe as they struggle to survive. This suggests a huge divide between the classes and the exploitation of the poor by the rich, the poor being 'marked by weakness' even though they are in the majority, 'every face'. ...read more.

The third stanza is a criticism of the church's failure to protect the most vulnerable part of the society: the young. Blake speaks of 'the Chimney-sweeper's cry' and the 'black'ning church', suggesting that the chimney sweepers are blackened by the church in soot, which oppresses them and denies them of their youth by making them experienced, the church spurns the chimney sweepers pleas and 'appalls' in doing so. Blake couples the church with the ruling upper classes by condemning the inadequacy and oppression. The 'hapless soldier's sigh' suggests a lack of military authority, he is merely a pauper, whereas he should be a symbol of authority and strength, this could predict a possible revolution caused by the oppression of the lower class. ...read more.

Blake uses harsh cacophonic sounds suggest spite and hatred for the class system which Blake strongly disagrees with, for example, 'black'ning church appals.' Also short monosyllabic words convey the same message for example 'runs in blood down palace walls'. Blake ends many of the lines of this poems in words which have connotations of woe and give the poem a 'gloomy' tone such as 'appalls', 'cry' and 'curse'. The rhyme scheme further reflects the rigid status of the classes, it follows a highly structured ABAB scheme which suggest simplicity and repetition in conveying the message that there is little hope for the future. ...read more.