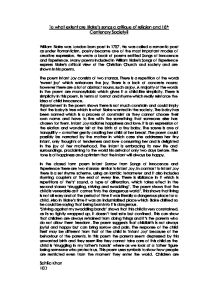 William Blake. To what extent are Blakes songs a critique of religion and 18th Century Society?

To what extent are Blake's songs a critique of religion and 18th Centenary Society? William Blake was London born poet in 1757. He was called a romantic poet as under Romanticism, poetry became one of the most important modes of creative expression. He wrote a book of poems entitled Songs of Innocence and Experience. Many poems included in William Blake's Songs of Experience express Blake's critical view of the Christian Church and society and are shown in his poems. The poem Infant Joy consists of two stanzas. There is a repetition of the words 'sweet joy' which enhances the joy. There is a lack of concrete nouns; however there are a lot of abstract nouns, such as joy. A majority of the words in the poem are monosyllabic which gives it a child-like simplicity. There is simplicity in this poem, in terms of format and rhyme which really reinforce the idea of child innocence. Enjambment in the poem shows there is not much constrain and could imply that the baby is free which is what Blake wanted in the society. The baby has been named which is a process of constraint as they cannot choose their own name and have to live with the something that someone else has chosen for them. Infant Joy radiates happiness and love. It is an expression of the elation and wonder felt at the birth of a tiny baby. ...read more.

but that they end up going to heaven where as the cleaner people might not as they do not have the same innocence as the children. "All their bags left behind" can show that the little bags that the boys carried would be left behind and also metaphorical reference to having the weight of their shoulders. The line "That thousands of sweepers, Dick, Joe, Ned and Jack" it a hyperbole and also a paradox as it mentions thousands but only four are named. This could imply that they are not important enough for more of them to be mentioned and can show that all of them basically are the same and are not concerned about individually and the poem shows what happens to these little boys who have nobody to take care of them. Also the names are all monosyllabic which show the simplicity an innocence of the chimney sweeper. It can shows that in society then that having a name like that distinguished you as lower class even if it was short form of the name. The final line 'so if all do their duty they need not fear harm' could be a cynical and angry response to a religious idea that justifies the suffering of these children. A lamb, a (religious) symbol for purity and innocence, is used to describe him. Also lambs are used for sacrifices in religion and Blake maybe trying to portray that the lives of little children are sacrificed for the upper class of society to live better. ...read more.

There are lines that are not only an indictment of the child labor, but show the impotence of moral authority to do something concerning it. 'Runs in blood down palace walls' shows that the place where the monarchies live is to blame for all the 'soldiers' deaths as they send them out to war while they live luxuriously. It could also suggest a biblical image the writing is on the wall - the poet is a prophet foretelling the governments eventual fall. The last stanza is about marriage and talks about harlots which are prostitutes and where condemned by the church and were thought to be diseases but in actual fact it was the men who were giving them sexually transmitted diseases and children. With marriage and hearse, it echoes back to the church and appals, suggesting marriage is an oppressor of omission. If Blake were alive today his poetry would still be critical of many things that are wrong with society today justlike his other work. Religion in today's society is not as essential and important to people as it was in the 18th century. Christianity now in this country currently is not as significant and people are much more relaxed about religion. He wrote about the constraint of children and how they had to work and live in really bad conditions but now children are not as badly treated and there are laws that concern their health and safety so his poetry would not be as relevant. Society has changed so his views on society would different and not as effective. ...read more.