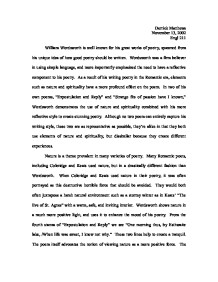 Derrick Matthews November 13, 2002 Engl 211 William Wordsworth is well known for his great works of poetry, spawned from his unique idea of how good poetry should be written. Wordsworth was a firm believer in using simple language, and more importantly emphasized the need to have a reflective component to his poetry. As a result of his writing poetry in the Romantic era, elements such as nature and spirituality have a more profound effect on the poem. In two of his own poems, "Expostulation and Reply" and "Strange fits of passion have I known," Wordsworth demonstrates the use of nature and spirituality combined with his more reflective style to create stunning poetry. Although no two poem can entirely capture his writing style, these two are as representative as possible, they're alike in that they both use elements of nature and spirituality, but dissimilar because they create different experiences. Nature is a theme prevalent in many varieties of poetry. Many Romantic poets, including Coleridge and Keats used nature, but in a drastically different fashion than Wordsworth. ...read more.

Wordsworth's goal has been reached, he has met Lucy and in their mutual happiness they spend their time traversing an orchard-plot and up a hill. Later in line 18 Wordsworth explicitly states his view on nature by writing, "Kind Nature's gentlest boon!" A particularly interesting aspect of nature present in this poem is the moon. The moon is mentioned in every stanza except the first and last. It's used as a indication of how the poem is progressing. When we first see the moon it is evening so it's barely visible at all. The moon then becomes the target for the speaker's eye and then begins to sink as he and Lucy travel together, finally disappearing out of the sky when they reach the cottage. While the shifting location of the moon can be viewed as an indication of the progression of the, it means much more to the speaker. The speaker is clearly aware of the presence and status of the moon throughout the poem. ...read more.

"Strange fits of passion have I known" also contains spiritual elements, very personal introspective ones. The entire poem is about the speaker's introspective reflection and his curiosity as to why he is feeling the emotions that he does. Unlike "Expostulation and Reply," the spiritual elements of this poem relate an experience of passionate emotions, not passive intellectualism. It is almost as if he is shocked that he's feeling these strange emotions and he's trying to determine from where they originate. I'd say the perhaps too obvious answer of love. But the speaker's genuine confusion of his own emotions suggests the possibility that it's more than that. Is it paranoia, madness even? While we may never know the answer, that personal journey is most certainly one that sticks with the reader in their own spiritual world. Romantic poets are grouped together by a fairly similar style of poetry and by the time in which they lived. William Wordsworth stuck out even then with his distinctive style using self reflection and his portrayal of nature. While "Expostulation and Reply" and "Strange fits of passion have I known" both possess these aspects, they are set apart from one another in their emotional experiences. ...read more.