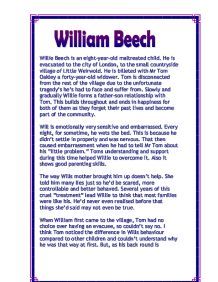 Willie Beech is an eight-year-old maltreated child. He is evacuated to the city of London, to the small countryside village of Little Weirwold. He is billeted with Mr Tom Oakley a forty-year-old widower. Tom is disconnected from the rest of the village due to the unfortunate tragedy's he's had to face and suffer from. Slowly and gradually Willie forms a father-son relationship with Tom. This builds throughout and ends in happiness for both of them as they forget their past lives and become part of the community. Will is emotionally very sensitive and embarrassed. Every night, for sometime, he wets the bed. This is because he didn't settle in properly and was nervous. That then caused embarrassment when he had to tell Mr Tom about his "little problem." Toms understanding and support during this time helped Willie to overcome it. ...read more.

The villager's reaction to William is just to welcome him, and the other evacuees, because they realise how hard it is on them. But soon people begin to grow fond of him for the person that he really is inside. As this true person begins to open up, he also makes friends more his own age, George, Carrie, Ginny and most of all Zach. The relationship with the other children grows and he feels something he'd never felt before, true friendship. Soon he's experiencing the highs and lows of childhood that he'd never had the chance to do before either. When Willie first went to pick blackberries with them, he wasn't sure how to act or talk around them because he didn't have to follow rules on what was expected of him. ...read more.

This is a bit of a shock to both him and Tom because he has only just settled down in the countryside. He has to go whether he likes it or not. When he returns home his mother doesn't even recognise him. After spending a distressed time starving, lonely, tied and locked up in an empty cupboard, Mister Tom rescues him. From then on they don't want to be separated because they love each other and don't want to suffer again like they did before. All this becomes true and is a happy ending for them both. Overall, William Beech is a great character to read about because his unusual personality gives a twist to the story and helps you to understand him better. You can relate what he's going/been through and noticeably see the changes in his emotions, feelings, and actions. By Emily Hemsworth. 9K. ...read more.