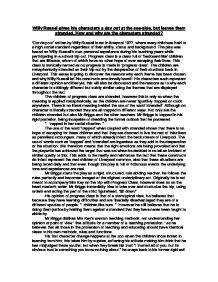 Willy Russel gives his characters a day out at the sea-side. How and why are they stranded?

Willy Russel gives his characters a day out at the sea-side, but leaves them stranded. How and why are the characters stranded? 'Our day out' written by Willy Russell is set in liverpool 1977, where every child was held to a high social standard regardless of their ability, status and background. The play was based on Willy Russell's own personal experiance during his teaching years while participating in a school trip out. Progress class is a class full of 'backward like' children that are illiterate, whom of which have no other hope of ever escaping their lives. This class is ironically named as no progress is made in 'progress class'. The children are metaphorically stranded on their trip out by the desperation of their stuations back in Liverpool. This essay is going to discover the reasons why each theme has been chosen and why Willy Russell left his constructs emotionally barefit. His characters each represent a different opinion and lifestyle, this will also be discussed and the reasons as to why each character is strikingly different but subtly similar using the themes that are displayed throughout the text. The children of progress class are stranded, however this is only so when the meaning is applied metaphorically, as the children are never figuritivly trapped or stuck anywhere. There is no literal meaning behind the use of the word 'stranded'. Although no character is literally stranded they are all trapped in different ways. Not only are the children stranded but also Mr Briggs and the other teachers. Mr Briggs is trapped in his rigid posterior, being incapable of shedding the formal outlook that he possesed. ".. trapped in her social situation.." The use of the word 'trapped' when coupled with stranded shows that there is no hope of escaping for these children and that they are doomed to live the rest of thier lives as penniless scroungers, many of which already infect the back streets of Liverpool. ...read more.

Mrs Kay's character was drafted this way to show the benefits of being a more compassionate character, also representing the educational system of the present. By crafting the situation in the way that Willy Russell has shows that as times have changed so has the educational system, it now benefits the children more and that the children of today do infact have better opitunities than those of the past. However this contrast was not made evident to patronise the past, but more effectively show that they had the best optintunities avaible to them in that time, as the leaniant attitude of the present would neither fix or solve the problems that confronted those in the past era's. The construct's relaxed attitude effectivly displays the fact that these representative children have no future, the given emotions towards this reinforces that fact, making the impact more sharper and dominant. This is the purpose of the play, to display the changes in the educational system, its attitude and the people imployed in its services. Therefore this message had to be of upper most importance, and had to be effectivly displayed which it was to exceedingly high standards by showing the contrasts that were represented by the characters of Mrs Kay and Mr Briggs. Carol is a member of progress class, who values Mrs Kay as a figure of comfortable authority. She is a dreamer, she wishes for more than she currently possess, but not in an unreasonable fashion. All she desires is a good life 'I like them nice places.' However she knows she cannot reach this goal but still stays relatively optimistic about her future. Carol is stuck in a time when there is no place for a 'backward' child who is unable to read write or does not have any other skill. Carol feels the peacful attire of the beach scenery, she creates the image of perfect tranquility when standing on the cliff's edge; the image perceived is that of looking to a future that is ruthless and as unpredictable as the waves. ...read more.

which displays their educated stance. As the children in progress class have difficulties with learning it is expected that they would speak without the refined edge of someone who went to further education. "We bring them to a crumbling pile of bricks mortar.." Willy Russell made the language rift between adults and the children in the text to show that these were uneducated children and excellent adults whom of which act differently towards the children even though they came from the same high social standing. Also this adds to the reality of the play, as this is the lanuage that would be used, with the common accent and basic vocabulary. The dialect used by the children also show the differences in era's and that as time developes the English language is becoming more lax, that the children are talking very different from their parents and granparents, this is due to outside influences, aswell as upbringing and social status. In conclusion the youths of Progress Class are stranded, but only by their situations, backgrounds and lack of future. The children have no hope of ever making anything of themselves other than factory workers or homeless street people. The character of Carol is crafted to transmit the message that not all children had a future and that sometimes no future was better than the one they had in store. This play shows that not only children can become stranded by circumstances but that adults can to have no way to escape the future they set for themselves. This play contains many morals and addresses serious issues that are real. It helps the auidence understand better the life of children in lower classes and those who have no future, this is why Willy Russell left the children stranded, so that they audience can identify better with the real children in those times through the actors in the play, the situations that accure and the reason's they accure. ...read more.