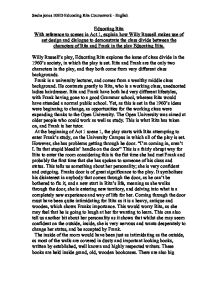 Willy Russell makes use of set design and dialogue to demonstrate the class divide between the characters of Rita and Frank in the play Educating Rita.

Educating Rita With reference to scenes in Act 1, explain how Willy Russell makes use of set design and dialogue to demonstrate the class divide between the characters of Rita and Frank in the play Educating Rita. Willy Russell's play, Educating Rita explores the issue of class divide in the 1960's society, in which the play is set. Rita and Frank are the only two characters in the play, and they both come from very different class backgrounds. Frank is a university lecturer, and comes from a wealthy middle class background. He contrasts greatly to Rita, who is a working class, uneducated ladies hairdresser. Rita and Frank have both had very different lifestyles, with Frank having gone to a good Grammar school, whereas Rita would have attended a normal public school. Yet, as this is set in the 1960's ideas were beginning to change, as opportunities for the working class were expanding thanks to the Open University. The Open University was aimed at older people who could work as well as study. This is what Rita has taken on, and Frank is her tutor. At the beginning of Act 1 scene 1, the play starts with Rita attempting to enter Frank's study, on the University Campus in which all of the play is set. ...read more.

The use of dialogue in Act 1 scene 1 also differentiates Frank and Rita further. Frank uses longer sentences and has an extensive vocabulary; unlike Rita he doesn't use any abbreviations, and talks in plain Standard English. He admits to Rita that he regularly swears but he never does during the first act. On the other hand Rita has a very different style of language. Her pronunciation is poor; she regularly uses abbreviations, and swears all the time. The way that somebody talks is the main way that you are able to detect, the class or social status, which that person comes from. During scene one, most of the dialogue is Rita talking and Frank answering her questions; this shows her confidence around people. It could also be her way of dealing with nerves This is unusual because you would expect Frank to be the more confident one, as he is the teacher. In Act 1 scene 6 Rita had been invited to a dinner party at Franks house with his wife and other guests. In Act 1 scene 7, Rita explains her reason for not turning up. Rita didn't go to Frank's dinner party because she felt that her dress, language and manners weren't good enough for the people who were going to be at the party. ...read more.

Rita and Frank are both very different people who come from very different backgrounds, yet we haven't considered the fact that maybe they are actually quite alike. They both have very low self esteem and put themselves down. Rita, about her inability to learn, and Frank about the way he teaches, and his failed attempt to become a poet. Therefore they both turn to things that comfort them. Rita smokes and Frank drinks, both very bad for you, but can make you feel better. They also have similarities in their Marriages. Frank has left his wife, and Rita is on the verge of leaving her husband. Consequently, Rita and Frank find that they have a lot in common, and you can tell that Rita and Frank secretly thoroughly enjoy each other's company. In conclusion Willy Russell manages to convey his meaning brilliantly through the use of set design and dialogue. Using set design to show the class divides; he used the pretentious and majestic furniture of Frank's study, to show the awe and appreciation that Rita has for the things. He uses language to show the two very different styles in which the talk, which portrays the two very different bringing ups that they have had, as well as their very different lifestyles. ?? ?? ?? ?? Sasha jones 10ED Educating Rita Coursework - English ...read more.