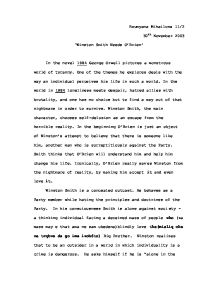 'Winston Smith Needs O'Brien' in the novel 1984 by George Orwell.

Roumyana Mihailova 11/2 30th November 2003 'Winston Smith Needs O'Brien' In the novel 1984 George Orwell pictures a monstrous world of tyranny. One of the themes he explores deals with the way an individual perceives his life in such a world. In the world in 1984 loneliness meets despair, hatred allies with brutality, and one has no choice but to find a way out of that nightmare in order to survive. Winston Smith, the main character, chooses self-delusion as an escape from the horrible reality. In the beginning O'Brien is just an object of Winston's attempt to believe that there is someone like him, another man who is surreptitiously against the Party. Smith thinks that O'Brien will understand him and help him change his life. Ironically, O'Brien really saves Winston from the nightmare of reality, by making him accept it and even love it. Winston Smith is a concealed outcast. He behaves as a Party member while hating the principles and doctrines of the Party. In his consciousness Smith is alone against society - a thinking individual facing a deceived mass of people who (za mass may e that ama ne sam ubedena)blindly love the(misliq che ne trqbva da go ima izob6to) ...read more.

- that O'Brien was thinking the same thing as himself. (Orwell p.19) To know that he is not alone in his hatred for the Party - even that is an escape from "the locked loneliness in which one had to live" (Orwell p.20). People tend to believe what they want to believe. Thus,(sloji tazi zapetaika:)) in Winston's mind O'Brien becomes a secret friend who is a political conspirator. Smith is unable to see that O'Brien's collaboration is simply the necessary illusion. Once happened to believe that O'Brien is a member of the Brotherhood, Winston starts interpreting reality in such a way as to keep this impression. In one of his dreams Smith hears somebody saying: "We shall meet in the place where there is no darkness" (Orwell p.27). Winston does not see the face of the man talking, but as a consequence of his interpretation, he identifies "the voice as O'Brien's" (Orwell p.27). When Winston starts keeping a diary, he needs to address the diary to "a particular person" (Orwell p.84). Again he chooses O'Brien: He knew, with more certainty than before, that O'Brien was on his side. ...read more.

O'Brien really succeeds in changing Winston's mind. Using torture to make Smith relinquish all his beliefs and hopes for a better world, even his love for Julia, O'Brien deprives him of the sense of life. If one has nothing to live for, the tyranny of the Party does not matter anymore,(sloji zapet.) and he is not motivated to rebel against it. O'Brien is the one "to cure" Winston from his disobedience: "He had the air of a doctor, a teacher, even a priest, anxious to explain and persuade rather than to punish" (p.257). Smith really needs O'Brien's help in order to accept reality. Winston's despair is caused by the fact that he cannot acquiesce with the formidable reality. Loneliness and helplessness to rebel against the regime of the Party make him suffer. In the beginning of the book O'Brien is a needed illusion - an imaginary political enemy of the Party for Winston not be alone in his hatred. At the end,(zap.i tuk) O'Brien saves Smith from his anguish by altering his mind and depriving him of the sense of his life. In both cases Winston needs O'Brien in order to cease suffering and to survive. ...read more.

An interesting take on the role of O'Brien and his interaction with Winston within 1984. This candidate discusses their relationship and its wider significance within the novel's plot. Overall, an effective and detailed answer to the question which remains both ...

An interesting take on the role of O'Brien and his interaction with Winston within 1984. This candidate discusses their relationship and its wider significance within the novel's plot. Overall, an effective and detailed answer to the question which remains both varied and organised.

This candidate evaluates and analyses the text fairly well, using quotations and evidence to back up any previously stated points. Their examination of O'Brien in particular is extensive and thorough which shows a heightened understanding of both the text and Orwell's supposed intentions.

Perfectly fine. Spelling, punctuation and grammar are all adequate which is to be expected. This candidate also emplys a concise and effective structure which helps demonstrate his understanding of Orwell's work.