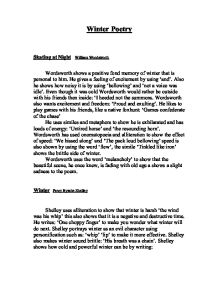 Winter Poetry Skating at Night William Wordsworth Wordsworth shows a positive fond memory of winter that is personal to him. He gives a feeling of excitement by using 'and'. Also he shows how noisy it is by using 'bellowing' and 'not a voice was idle'. Even though it was cold Wordsworth would rather be outside with his friends then inside: 'I heeded not the summons. Wordsworth also wants excitement and freedom: 'Proud and exulting'. He likes to play games with his friends, like a native foxhunt: 'Games confederate of the chase' He uses similes and metaphors to show he is exhilarated and has loads of energy: 'Untired horse' and 'the resounding horn'. Wordsworth has used onomatopoeia and alliteration to show the effect of speed: 'We hissed along' and 'The pack loud bellowing' speed is also shown by using the word 'flew', the simile 'Tinkled like iron' shows the brittle side of winter. ...read more.

When icicles hang by the wall William Shakespeare Shakespeare uses everyday characters to show the realism of his poem to create a typical winter scene: 'd**k the Shepherd'. He shows that even though the weather is awful life goes on: 'ways be foul, then nightly sings the staring owl'. Using rhyme gives the feel of movement but is broken when the owl makes its sound: 'Blow' 'Snow' 'Saw' Raw'. Everyone gets effected by the cold: 'Coughing drowns the parsons saw' 'Marian's nose is red and raw'. Using words like 'nipp'd' and 'ways be foul' shows that is a cold mucky time. Shakespeare tells it how winter was there and then. There is no sympathy for winter. Emmonsail's Heath in Winter John Clare Clare gives no critical comment during his poem, he just observes what's around him: 'Crimpled leaves' 'an oddling crow' 'the old heron'. ...read more.

He makes the poem exciting, exhilarating and gives a sense of movement. This poem is effective for these reasons and makes you really believe that you are their taking part in the chase. In Clare's poem 'Winter' it reflects winter as being horrible and destructive. This is my favourite, as I believe this is how a typical cold winter day acts. Winter has been given the human characteristics to great effect showing everything winter is known to do. Shakespeare creates a sense of realism in his poem 'When icicles hang by the wall' by give the poem everyday characters. He gives no sympathy, which makes it sound more real and effective. This poem is probably the most real out of all four and it portrays winter as a typical thing that happens. Clare's poem 'Emmonsail's Heath in winter' is based on observation. He makes everything sound beautiful and in harmony with everything else. He makes everything very calm leisurely. This poem portrays winter as a beautiful time almost like a well-painted painting. ...read more.