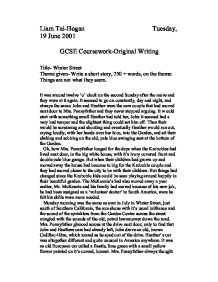 Liam Tai-Hogan Tuesday, 19 June 2001 GCSE Coursework-Original Writing Title- Winter Street Theme given- Write a short story, 750 + words, on the theme: Things are not what they seem. It was around twelve 'o' clock on the second Sunday after the move and they were at it again. It seemed to go on constantly, day and night, and always the same. John and Heather were the new couple that had moved next door to Mrs. Pennyfather and they never stopped arguing. It would start with something small Heather had told her, John it seemed had a very bad temper and the slightest thing could set him off. Then their would be screaming and shouting and eventually Heather would run out, crying loudly, with her hands over her face, into the Garden, and sit their shaking and sobbing on the old, pale blue swinging seat at the bottom of the Garden. Oh, how Mrs. Pennyfather longed for the days when the Krobobles had lived next door, in the big white house, with it's ivory covered front and double pale blue garage. But when their children had grown up and moved away the house had become to big for the Kroboble couple and they had moved closer to the city to be with their children. But things had changed since the Kroboble kids could be seen playing around happily in their beautiful garden. ...read more.

It was the things she couldn't see from her window that worried Mrs. Pennyfather the most though, his face looked like it needed a good wash and a shave, and his eyes were bloodshot so badly that it looked like he hadn't slept for days. "Hi John, I was just wondering if I could speak to Heather," Mrs. Pennyfather asked tentatively. John looked nervous and scarred when she asked him, and replied with very little conviction. "I... erm... think she's gone to stay with her friend for a few days." "Is there any way I could contact her," asked Mrs. Pennyfather more confidently, feeling she had him on his back foot. At this question, John's face seemed to swell up with rage. "No, I don't know where she's gone, maybe she just hasn't come back from work, or maybe her cars broke down how the hell should I know, all I know is her and her car aren't here, now could you please leave me alone," John blurted out angrily. "I'm sorry," said Mrs. Pennyfather as she turned and almost ran from the house, the sound of the door slamming ringing in her ears. It was dark as she ran across John's Garden and she didn't see the sprinkler wrapped up in long grass, she tripped over it painfully, lying facing the house. Then she saw it, she could just see under the garage doors, and yes, they were definitely a pair of tires and the bottom of an exhaust pipe. ...read more.

She knew they were inside, because no one had left or entered the house since the police had been around and the door was still open. Then "Scratch, scratch." What was that noise, it was coming from inside the house, she peeked though the gap in the door, it was coming from the cupboard under the stairs. She slowly pushed open the door. "Scratch, scratch." She crept inside the house and tried to say "Hello" but nothing came out. She crept closer to the cupboard under the stairs. "Scratch, scratch." She had to open the door, what if John had managed to fool the police and had Heather trapped under the stairs. She had to open the door and get Heather out. She took one more step towards the door and opened it quickly. Mrs. Pennyfather screamed as John fell out of the cupboard bound by his wrists and ankles and tightly gagged around the mouth, with his face covered in blood. His eyes shot open and as there eyes meet she could see his pain. Mrs. Pennyfather had no idea what was going on. Then his eyes seemed to look though her. No, behind her, she saw the look of terror in his face. She turned around just in time to see Heather with an axe raised above her head. A million thoughts rushed though her head she had no idea what was happening. And then it didn't matter. The axe came down before Mrs. Pennyfather could move. ...read more.