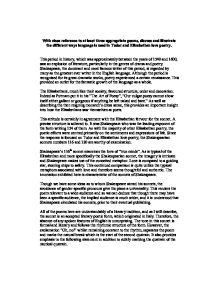 With close reference to at least three appropriate poems, discuss and illustrate the different ways language is used in Tudor and Elizabethan love poetry.

With close reference to at least three appropriate poems, discuss and illustrate the different ways language is used in Tudor and Elizabethan love poetry. This period in history, which was approximately between the years of 1540 and 1600, saw an explosion of literature, particularly in the genres of drama and poetry. Shakespeare, the dominant and most famous writer of this period, is regarded by many as the greatest ever writer in the English language. Although the period is recognised for its great dramatic works, poetry experienced a certain renaissance. This provided an outlet for the fantastic growth of the language as a whole. The Elizabethans, much like their society, favoured structure, order and decoration. Indeed as Puttnam put it in his "The Art of Poesy", "Our vulgar poesy cannot show itself either gallant or gorgeous if anything be left naked and bare." As well as describing the then reigning monarch's dress sense, this provides an important insight into how the Elizabethans saw themselves as poets. This attitude is certainly in agreement with the Elizabethan fervour for the sonnet. A precise structure is adhered to. It was Shakespeare who was the leading exponent of the form writing 154 of them. As with the majority of other Elizabethan poetry, the poetic efforts were centred primarily on the sentiments and expressions of life. ...read more.

This polished, highly literary language is unlike the simple, ballads of the oral tradition. There is no narration in any of these sonnets, only the description of time, relationships and love. However, the aim was not just to discuss or illustrate love. The 130th sonnet from Shakespeare is a direct parody of the torrent of love sonnets, which were exceedingly common during the period. Here, the language is used clumsily and unsubtly. This is interesting since by looking conversely at this, the type of poetry favoured by the Elizabethans can be deduced. The imagery, language and lexis are much simpler. In contrast to the conceited, sustained metaphors, each line is an individual metaphor. Additionally, each of these metaphors is, in effect, a 'negative metaphor'. A concrete object is used to liken something to a concrete area of the body that is then stated to be unlike that, insulting the person to whom this is addressed. An example of this is in line two, "Coral is far more red than her lips' red" followed by a completely separate comparison of snow with breasts. This likening of one concrete object to another is unlike that of the previous sonnet, and therefore provides an illustration of, in the Elizabethans' eyes, the accepted comparison. As previously, Shakespeare has addressed one person, though once again the expected audience is much larger. ...read more.

Characteristic of the pastoral genre, Marlowe adopts a contrived, lyrical simplicity, illustrated in the opening line "Come live with me and be my love". The language is monosyllabic and the imperative in "be my love" is characteristic of the persuasive tone. The images are simple and concrete and have the intention of imitating 'country life'. The somewhat used image of "bed of roses" is evidence to the typical type of comparison, which is used. In this way, the pastoral tone of this poem may be seen as patronising, and in fact provides ample opportunity for satire, which Sir Walter Raleigh takes with aplomb. (Conversely, it is unfair to view the entire genre from this one viewpoint, pastoral poetry was capable of satire itself and was often directed at city life). Befitting of Elizabethan poetry as a whole, the poem is in a rigid iambic tetrameter, four lines to each stanza. So, the way in which love is presented here is markedly different from the sonnets examined before. Here, the tone is simple, descriptive and informal. The language though still literary is concentrated more on the informalities of spoken English; this is exhibited in its simplicity. In spite of this, it is important to separate the portrayal of love and the genre in which it is set. Though this does at least show the ways in which the Elizabethans and Tudors were willing to illustrate love in their poetry. ...read more.