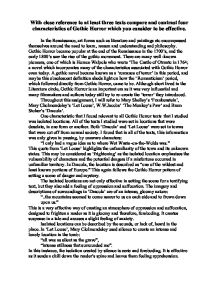 With close reference to at least three texts compare and contrast four characteristics of Gothic Horror which you consider to be effective.

With close reference to at least three texts compare and contrast four characteristics of Gothic Horror which you consider to be effective. In the Renaissance, art forms such as literature and paintings etc encompassed themselves around the need to learn, reason and understanding and philosophy. Gothic Horror became popular at the end of the Renaissance in the 1700's, and the early 1800's saw the rise of the gothic movement. There are many well-known pioneers, one of which is Horace Walpole who wrote 'The Castle of Otranto in 1764; a novel which incorporates many of the characteristics associated with Gothic Horror even today. A gothic novel became known as a 'romance of terror' in this period, and maybe this obsolescent definition sheds light on how the 'Romanticism' period, which followed directly from Gothic Horror, came to be. Although short lived in the Literature circle, Gothic Horror is an important era as it was very influential and many filmmakers and authors today still try to re-create the 'terror' they introduced. Throughout this assignment, I will refer to Mary Shelley's 'Frankenstein', Mary Cholmondeley's 'Let Loose', W.W.Jacobs' 'The Monkey's Paw' and Bram Stoker's 'Dracula'. One characteristic that I found relevant to all Gothic Horror texts that I studied was isolated locations. ...read more.

'Frankenstein', by Mary Shelley uses both of these features mostly and she uses weather as a symbol of what is to come: "darkness and storm increased every minute and the thunder burst with a terrific crash over my head...vivid flashes of lightening dazzled my eyes; illuminating the lake, making it appear like a vast sheet of fire" Here, she builds up a scene of horror using powerful, frightening weather imagery, a contrast of light and darkness. Although Mary Cholmondeley uses weather to create atmosphere in 'Let Loose', she uses it very differently. While Mary Shelley uses storms and darkness, Cholmondeley uses oppression through heat to create a feeling of suffocation and terror: "the day was oppressively hot", "the heat was still intense", "the air about me seemed heavy with death." She also uses foreboding language to create expectancy and anxiety: "there was a sensation of trouble in the air, as if, although the day was bright and clear, a storm were coming." This is a more subtle approach to using weather, but equally as effective. One text creates outright terror through weather and the other creates a spine-tingling expectancy. I found that 'Dracula' made excessive use of light and dark to create an oppressive atmosphere. ...read more.

Even the 'monster's' reaction on beholding itself adds to the horror. If the monster cannot behold itself, then how could we? Its reaction to itself highlights its wretchedness: "Why did you form a monster so hideous that even you turned from it in disgust?" The concept that the reactions of characters initiate more fear in the plot is heightened in 'The Monkey's Paw'. Although a repulsive description of Herbert is included, I find that the father's frightened reaction on even thinking of beholding his dead son is more effective in initiating fear in an audience: "he has been dead ten days, and besides he - I would not tell you else, but - I could only recognise him by his clothing. If he was too terrible for you to see then, how now?" "For God's sake, don't let it in" In 'The Monkey's Paw', the characters to not face the 'monster' and they do in Frankenstein, but I believe that the mystery of his appearance and intent is far more frightening than in Frankenstein. This proves that with a combination of many characteristics of horror, the best horror scene is created. I believe that the supernatural and superstition are best used in conjunction with other characteristics, such as fear of the unknown, extreme behaviour and weather. In Dracula, the supernatural and superstitions are emphasised by the extreme behaviour of the people around. ...read more.