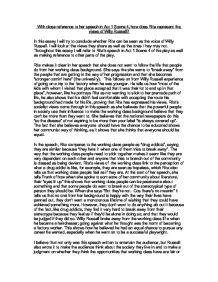 With close reference to her speech in Act 1 Scene 4, how does Rita represent the views of Willy Russell?

With close reference to her speech in Act 1 Scene 4, how does Rita represent the views of Willy Russell? In this essay I will try to conclude whether Rita can be seen as the voice of Willy Russell. I will look at the views they share as well as the ones they may not. Throughout this essay I will refer to Rita's speech in Act 1 Scene 4 of the play as well as making reference to other parts of the play. Rita makes it clear in her speech that she does not want to follow the life that people do from her working class background. She says the she wants to "break away" from the people that are getting in the way of her progression and that she becomes "stronger comin' here" (the university). This follows on from Willy Russell experience of going on a trip to the factory when he was younger. He tells us how "most of the kids with whom I visited that place accepted that it was their lot to end up in that place", however, like he portrays Rita as not wanting to stick to her premade path of life, he also shows that he didn't feel comfortable with accepting the route his background had made for his life, proving that Rita has expressed his views. Rita's socialist views come through in this speech as she believes that the powerful people in society use their influence to make the working class background believe that they can't be more than they want to. ...read more.

Russell is trying to make the audience realise that working class people are not having their voices heard and instead have been given a purpose of living rather than making a purpose for themselves. The fact that Russell has portrayed his views through a character is because he is able to make it come from the voice of a woman. From the audience's perspective, they would be relate more to a woman than a man because a woman is seen as the vulnerable gender, so the audience would feel more sympathetic towards her views, therefore more likely to take them in. Also, the fact that she is working class would make them realise that Russell's views of how you don't need an education to have a valid point would make his views more believable. Also, the fact that women were seen to be the inferior person at the time compared to men at the time would have created more of an impact on the audience as it would raise a controversial subject at the time of women wanting to aspire for more. Men could do what they wanted at the time, so if a man was the one who raised these issues it would have had the same effect on the audience. However, on the flip side, this would create easier viewing for the audience as women at the time would have been seen as clever than men and therefore more silly and daft - this comical side to women would make the play less intense for the audience and therefore more enjoyable. ...read more.

She didn't know what she wanted to do; first she needed to find the answer to the question of "Me? What's me?". The main similarity between Russell and Rita is the fact that they both go back to education to gain a qualification in something that they want to not only better their lives, but also to be whoever they wanted to be - English Literature. Russell didn't want to be a hairdresser all his life, so he took up a course at a college after six years of working in a salon, and Rita also did the same. After working in a hair salon for her adult life, she enrolled in an Open University course, as she knew that she didn't want to follow the life planned for her by her class, she didn't want to have a baby as soon as she got married. She wanted to live her life before making someone else's. This was the type of life which Russell strongly opposed where someone has set it out for you already, and you have no decision in the matter. To conclude, I think Russell has used Rita to voice his opinions with hidden meanings in this speech. I believe that he has tried to make the character a bit different from him to suit the audience and the make the play more enjoyable to watch whilst at the same time projecting his views through her. He has tried to make his opinions subtle so that the audience think about them and start to develop their own ideas. ?? ?? ?? ?? ...read more.

This is a strong essay that responds well to the question, but would benefit from more technical vocabulary and a slightly better quality of writing. The question asks for two specific things: "close reference" to Rita's speech, and the views ...

This is a strong essay that responds well to the question, but would benefit from more technical vocabulary and a slightly better quality of writing. The question asks for two specific things: "close reference" to Rita's speech, and the views of the author as a contextual influence on the play. "Close reference" to the text is almost achieved by the student, as they continually quote the text: this is good as it shows that they can back up most of what they argue, rather than just making general, unproven statements. However, at times this lapses, and they do not back up the precise aspects of their judgements: Rita's "communist way of thinking" is not backed up by evidence, and while Rita clearly believes there should be greater equality, communism is different from this, so the judgement becomes inaccurate. In the absence of evidence it would be better to say "Rita believes there should be more equality in society because she says lack of aspiration is "a disease"...". The student clearly addresses the second aspect of the question - Willy Russell's views - by continually linking their judgements on Rita's character to Russell's background and opinions, showing they are on task with the question's demands, and are also able to assess the contextual influences on the text. This could be improved on by backing up what the student says about Russell's views: for example, there are only three quotes from him in the essay. It would be ideal to have a quote for each claim that he believes something, so that the student was using sustained evidence, but this is perhaps not possible: the student could maybe point out where they got Russell's viewpoint from, such as (for example) "In the introduction to the play Russell says..." or "In his autobiography Russell says...".

The student is right to consider alternative interpretations of Russell's presentation of his views: by saying "on the flip side" in the fifth paragraph, the student is showing they recognise there is more than one opinion on Russell's decision to present Rita as a woman. The student is aware of some techniques used by the author, such as speech, which is good because it shows the student understands what goes together to make the text, rather than just a general idea - "Rita's speech" sounds better than "Rita says things to the audience". They could improve by picking more advanced terms, such as "protagonist" (main character who is not the villain) to describe Rita (and as it is a two-character play, arguably Frank as well) - this would show they have a strong understanding of terms used in the study of literature. "Speech" is a term used to study literature, so the student is right to use it, but it is much more general than "protagonist", which is specific to literature.

Consideration of stage directions are helpful because they show the student understands the "form" of the text (the fact it's a play), but the student is right to only focus on them for a short while because the main source of Russell's views is in the dialogue. The essay's conclusion is excellent: it summarises the arguments made, which is good as it shows the student can organise their ideas. It also answers the question, but in a more subtle way than "I agree with the statement" - by considering the effect on the audience, the student is showing their ability to go beyond answering the question, and point out other influences on the characterisation of Rita. Evidence from the text and context are relevant to the level of analysis, and are covered in the "Response to the question" section.

The spelling and punctuation in the essay is very good, which avoids confusion and shows care has been taken, but at times some sentences don't make sense, such as "Rita compares to the working class people as 'drug addicts'...", which suggests the essay hasn't been proofread. The student uses some informal language that isn't suitable for an academic essay, such as "...silly and daft". It would be better to always write in a formal style, as the essay is on a serious topic. It would also be better to avoid saying "I", such as in "I believe", because it makes the essay sound one-sided and personal - this goes for all essays, but the focus here should be on Russell and the characters, not the author of the essay.