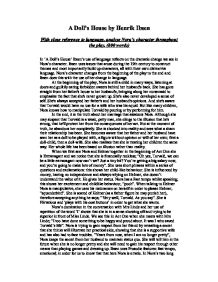 With close reference to language, analyse Nora's character throughout the play

A Doll's House by Henrik Ibsen With close reference to language, analyse Nora's character throughout the play. (800 words) In 'A Doll's House' Ibsen's use of language reflects on the dramatic change we see in Nora's character. Ibsen uses issues that arose during the 19th century to construct themes and most importantly build up characters, all with their own distinctive language. Nora's character changes from the beginning of the play to the end and Ibsen does this with the use of her change in language. At the beginning of the play, Nora is still a child in many ways, listening at doors and guiltily eating forbidden sweets behind her husband's back. She has gone straight from her father's house to her husband's, bringing along her nursemaid to emphasize the fact that she's never grown up. She's also never developed a sense of self. She's always accepted her father's and her husband's opinions. And she's aware that Torvald would have no use for a wife who was his equal. But like many children, Nora knows how to manipulate Torvald by pouting or by performing for him. In the end, it is the truth about her marriage that awakens Nora. Although she may suspect that Torvald is a weak, petty man, she clings to the illusion that he's strong, that he'll protect her from the consequences of her act. ...read more.

She will tell him in the future when she is no longer pretty and she will need to gain his respect through other means than playing games and dressing up. Ibsen uses Prosodic features: fast tempo, emotional; in order for us to know that that here Nora is erratic. In Nora's two long speeches, on pages thirty six and thirty seven we learn more about her character through her use of language. She uses rhetorical question, as she needs reassurance, she is trying to justify her actions and persuade Mrs Linde to agree with her; "What do you think of my big secret". The use of her having long speeches show she is boasting about her secret. She is more confident as she is given the opportunity to speak for a long time; this is very different from her speeches with Helmer, as he's in control. Nora plays the role of a doll wife, what is expected of her, she associates a man with being in control; "almost like being a man". "If anyone should try and take the blame, and say it was all his fault", here Nora holds a romantic view. She expects a miracle from Helmer. She assumes that her husband will act nobly to save her reputation and will take the blame on himself by falsely confessing in court that he had forged the signature. ...read more.

She is avoiding her children as she thinks that moral corruption could be hereditary. In act two when Nora talks to Helmer about keeping Krogstad on at the bank she is very flirtatious and manipulative, "Squirrel would do lots of pretty tricks for you if you granted her wish". In Act three when Torvald finds out the truth and Nora sees his reaction she is shocked. This causes a dramatic change in Nora's character. She is direct, open and honest; "yes, Torvald, I've changed". She doesn't belong to Torvald anymore; she's changed out of her fancy dress costume which symbolises that she's not playing the role expected of her anymore. It's time for her to face reality. Nora is now in control of the conversation, she is cold, rational, serious and determined; "Our home has never been anything but a playroom. I've been your doll-wife, just as I used to be papa's doll- child". Nora has realised that she wants to be treated as an individual. All her excepted ideas are now called into question. She uses a series of statements; she asks no questions as she no longer has any need for reassurance. Nora no longer uses her childlike expressions "pooh". She is commanding, confidant and has no hesitation, "Sit down". Her paralinguistic features are now different, she is no longer walking around but instead she has her bag and coat on ready to leave, this shows her determination. Nora has 'grown up'. ?? ?? ?? ?? ...read more.