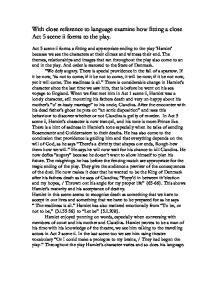 With close reference to language examine how fitting a close Act 5 scene ii forms to the play. Act 5 scene ii forms a fitting and appropriate ending to the play 'Hamlet' because we see the characters at their climax and witness their end. The themes, relationships and images that ran throughout the play also come to an end in the play. And order is restored to the State of Denmark. "We defy augury. There is special providence in the fall of a sparrow. If it be now, 'tis not to come; if it be not to come, it will be now; if it be not now, yet it will come. The readiness is all." There is considerable change in Hamlet's character since the last time we saw him, that is before he went on his sea voyage to England. When we first met him in Act 1 scene ii, Hamlet was a lonely character, still mourning his fathers death and very un-happy about his mother's "o' er-hasty marriage" to his uncle, Claudius. After the encounter with his dead father's ghost he puts on "an antic disposition" and uses this behaviour to discover whether or not Claudius is guilty of murder. In Act 5 scene ii, Hamlet's character is now tranquil, and his tone is more Prince like. There is a hint of sadness in Hamlet's tone especially when he talks of sending Rosencrantz and Guildernstern to their deaths. He has also come to the conclusion that providence is guiding him and that everything depends on the will of God, as he ...read more.

This is also a fitting end to the play, as Hamlet's story will be told. Hamlet's handover of Denmark to Fortinbras in his dying wishes shows his maturity and concern for his country. "O yet defend me, friends. I am but hurt." {5.ii.317} The power that Claudius obtained when he took over the throne of Denmark has gone to his head by the end of the play. In the quoted line we see that he is trying his hardest to cling on the crown, he doesn't want to let go of his authority and position. In the Elizabethan times order played a very important role in the running of a State. They believed that the King ruled by divine right and was appointed by God. Claudius usurping the throne put the chain of order in disorder. By doing so and marrying his sister-in-law, he caused his brother's ghost to rise out of his grave to seek revenge. Claudius's heinous act would have cause suspense in the audience's minds; this suspense was like the state of mind of the Elizabethan people as they were curious to know the heir to the throne after Queen Elizabeth. Claudius creates suspense in the play with his scheming and plotting against Hamlet. His tactics are similar to the Machiavellian form of scheming. First he plans to send Hamlet to England with Rosencrantz and Guildernstern to have them killed upon arrival. When this fails, he arranges a fencing match between Hamlet and Laertes and uses poison as a weapon. ...read more.

Even if it meant killing his own brother, and causing the break-up of families and the deaths of innocent people in the process. The Elizabethan audience would have been very disturbed with the appearance of the ghost in Act 1 scene I, as Marcellus says in Act 1 scene iv "Something is rotten in the State of Denmark". And to restore their frame of mind, Fortinbras is reintroduced into the play, at this stage to restore order in the troubled State of Denmark. Act 5 scene ii, is a fitting close to the play Hamlet. The scene brings to an end all the corruption that Denmark was steeped in. All the characters who aided "the human canker" example Polonius, Ophelia, Rosencrantz and Guildenstern and Laertes; and the victims of Claudius's deviousness, Hamlet, the Queen Gertrude and Claudius himself are dead. These characters meet their end either through "carnal, b****y, and unnatural acts, accidental judgements, casual slaughters" or "Of deaths put on by cunning and forc'd cause". When Hamlet puts Denmark in the hands of Fortinbras and dies on the throne, he is bringing an end to all the corruption that Denmark suffered during Claudius's reign. Hence we see that Act 5 scene ii, is a fitting close to the play Hamlet because, all the relationships, corruption and plotting that had begun in the beginning of the play has come to a halt, and has ended. We are given a last insight into the characters of Claudius and Gertrude, in their dying lines. The most important element that makes this scene a fitting close to the play is the restoration of order into the troubled state of Denmark. ...read more.