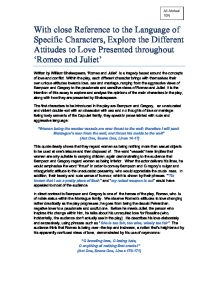 With close Reference to the Language of Specific Characters, Explore the Different Attitudes to Love Presented throughout Romeo and Juliet

With close Reference to the Language of Specific Characters, Explore the Different Attitudes to Love Presented throughout 'Romeo and Juliet' Written by William Shakespeare, 'Romeo and Juliet' is a tragedy based around the concepts of love and conflict. Within the play, each different character brings with themselves their own unique attitudes towards love, s*x and marriage, ranging from the aggressive views of Sampson and Gregory to the passionate and sensitive views of Romeo and Juliet. It is the intention of this essay to explore and analyse the opinions of the main characters in the play, along with how they are presented by Shakespeare. The first characters to be introduced in the play are Sampson and Gregory, an uneducated and violent double-act with an obsession with s*x and no thoughts of love or marriage. Being lowly servants of the Capulet family, they speak in prose tainted with rude and aggressive language: "Women being the weaker vessels are ever thrust to the wall: therefore I will push Montague's men from the wall, and thrust his maids to the wall" (Act One, Scene One, Lines 14-17) This quote clearly shows that they regard women as being nothing more than s****l objects to be used at one's leisure and then disposed of. ...read more.

The fourth character to be discussed is the Nurse, of the House of Capulet. She is of low social status, which is reflected in her bawdy (though unaggressive) sense of humour. However, Nurse treats Juliet as her own daughter (something Lady Capulet never did), a fact which is made apparent to the audience when Lady Capulet says "Thou knowest my daughter of a pretty age". Also, although Nurse displays a strong parental for Juliet, her views of love are rather superficial, and based upon appearances. "A man, young lady! Lady, such a man As all the world - Why he's a man of wax" (Act One, Scene Three, Lines 76-77) The above quotation (describing Paris) shows that Nurse considers appearances to be of utmost importance; the phrase "man of wax" implies perfection in looks. She also refers to Paris as "a flower" and doesn't mention anything about his character when persuading Juliet to marry him. Nurse's views on marriage are influenced by fond memories of her late husband "God be with his soul" and she also says to Juliet: "And I might live to see thee married once, I have my wish" (Act One, Scene Three, Lines 63-64) ...read more.

Later on in the play, he challenges Romeo to a fight to the death, demonstrating his obsession with his family's honour. The final character to be explored is Friar Lawrence, who, despite having two sons, treats Romeo like one of his children, giving advice and encouragement. He refers to Romeo as "good son", which tells the audience of his fatherly feelings. Friar Lawrence doesn't differentiate between the two houses of Capulet and Montague, unlike most of the other characters, and agrees to marry Romeo and Juliet in the hope that it will unite the conflicting families. To conclude, William Shakespeare delivers to us an array of moral values and attitudes to love, s*x and marriage in 'Romeo and Juliet'. One of his greatest works, the play expresses the views of all social classes, using marvellous linguistic tools that are unparalleled to this day. The audience are greeted with the violent and aggressive attitudes of Sampson and Gregory, juxtaposed by the passionate and sensitive views of love of Romeo and Juliet. Throughout the play, Shakespeare masterfully weaves humour and sadness, peace and conflict, love and hate, together into an intricate and entertaining plot that will be performed and studies for generations to come. ?? ?? ?? ?? ...read more.