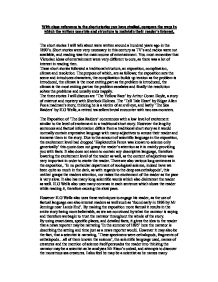 With close reference to the short-stories you have studied, compare the ways in which the writers use style and structure to maintain their reader(TM)s interest.

With close reference to the short-stories you have studied, compare the ways in which the writers use style and structure to maintain their reader's interest. The short stories I will talk about were written around a hundred years ago in the 1890's. Short stories were very necessary in this century as TV's and radios were not available, and reading was the main source of entertainment. You must remember that Victorian ideas of entertainment were very different to ours, as there was a lot of interest in reading then. These short stories followed a traditional structure, an exposition, complication, climax and resolution. The purpose of which, are as follows; the exposition sets the scene and introduces characters, the complication builds up tension as the problem is introduced, the climax is the most exiting part as the problem is introduced, the climax is the most exiting part as the problem escalates and finally the resolution solves the problems and usually ends happily. The three stories I will discuss are 'The Yellow Face' by Arthur Conan Doyle, a story of mistrust and mystery with Sherlock Holmes. The 'Tell Tale Heart' by Edgar Allen Poe a madman's story, thinking he is a victim of an evil eye, and lastly 'The Sea Raiders' by H.G Wells, a retired tea sellers brutal encounter with two sea monsters. The Exposition of 'The Sea Raiders' commences with a low level of excitement similar to the level of excitement in a traditional short story. However the lengthy sentences and factual information differs from a traditional short story as it would normally contain expressive language with many adjectives to amuse their reader and immerse them in the story. Due to the amount of scientific language in the exposition, the excitement level had dropped 'Haploteuthis Ferox was known to science only generically' this quote does not grasp the reader's attention as it is mainly providing you with facts. ...read more.

From the opening of 'The Yellow Face' to its complication the tension level increases, this level of tension is also very similar to that of traditional short story as the problem is clearly introduced. However it differs to a traditional short story as the narrator changes during the middle of the story, this leads to mystery being created. The writer engages his reader's interest by using an element of mystery, created by changing the narrator. There is a dramatic change in style between the two, narrators Watson and Monroe. The story begins with the with the relaxed and intellectual style of Watson, however this style of narration abruptly changes and the main character Monroe begins telling his story, with his frantic and nervous narration, this sudden change in these two very contrasting narrators which causes the reader to ask themselves questions as to why Monroe is nervous and agitated, which also engages the reader. Mystery is also created, as the readers do not yet know what the Yellow Face is and therefore are asking themselves many unanswerable questions at this stage. The use of language in 'The Yellow Face' also causes the tension level to increase 'Our visitor sprang from his chair, 'What!' he cried 'you know my name?' this quote demonstrates the surprise in Monroe by the use of an exclamation mark. The question mark at the end of his speech also shows the paranoia Monroe is suffering from and his confusion in how they know his name. In addition 'he cried' shows he is out of control and hysterical at that moment in the story. Also, using dramatic words such as 'sprang' increases excitement with the speed and tension of the word, and lastly the broken up sentences in Monroe's speech indicates his jerky and anxious character. Comparing the complication of 'The Yellow Face' to that of 'The Sea Raiders' you can clearly see that they both follow the structure of a traditional short story, also both their complications were higher in tension compared to their expositions. ...read more.

This change took place as Monroe accepted his wife's secret and the child, so Edgar Allen Poe displayed that by humanizing the child through the use of language. The message I feel the writer is trying to portray is that the colour of your skin should not matter and people of all races should be accepted. Victorian readers enjoyed morals at the end of their stories as they read books to give them knowledge; they also enjoyed learning new things as well. This message was important, especially to readers during that time period as people from the 100's obviously had very different ways of thinking and found it odd to socialize and mix with people from different backgrounds than themselves. In conclusion to my essay I feel as if 'The Sea Raiders' would most appeal to readers of the 1800's as they enjoyed being taught new things, mystery and science-fiction and 'The Sea Raiders' contained just that. Also it would have been an ideal story for Victorian readers as it followed a traditional short story structure. I feel it would also have entertained them excessively due to the mysterious and spooky sea monsters. The most entertaining story I feel for our times would have most likely been 'The Yellow Face' due to fast pace and high level of excitement throughout the whole story, as it takes much more to excite modern day readers than it does to entertain Victorian readers. As modern day readers have other things to pass their time with like play stations and televisions which contain such high amount or excitement that books seem quite petty. 'The Yellow Face' also contains a false resolution which heightens the excitement level further. Also detective stories are quite popular in modern day times, so a reader of our times would have much enjoyed this short story. Overall I feel people of different times periods have different likings and look for different things in books. Victorian readers look for more knowledge and learning, whereas people from modern day look for excitement and thrills. By Farhin Bhatti ...read more.