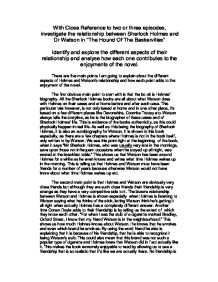 With Close Reference to two or three episodes, investigate the relationship between Sherlock Holmes and Dr Watson in The Hound Of The Baskervilles

With Close Reference to two or three episodes, investigate the relationship between Sherlock Holmes and Dr Watson in "The Hound Of The Baskervilles" Identify and explore the different aspects of their relationship and analyse how each one contributes to the enjoyments of the novel. There are five main points I am going to explain about the different aspects of Holmes and Watson's relationship and how each point adds to the enjoyment of the novel. The first obvious main point to start with is that the book is Holmes' biography. All the Sherlock Holmes books are all about what Watson does with Holmes on their cases and at home before and after each case. This particular tale however, is not only based at home and in one other place, it's based on a few different places like Devonshire, Coombe Tracey etc. Watson always tells the storyline, as he is the biographer of these cases and of Sherlock Holmes' life. This is evidence of the books authenticity, as this could physically happen in real life. As well as this being the biography of Sherlock Holmes, it is also an autobiography for Watson. ...read more.

a cup of tea, they are always talking about the case that they are currently dealing with, rather than a joke that someone said in a pub last night, for example. Holmes and Watson do not have equal positions in the job that they work in. Holmes is more of the "solver" and does not go out to explore. He uses his mental knowledge rather than his physical capabilities as he says in chapter one "I have been to Devonshire in spirit" we see from here that Holmes is a man of much intellect and can picture things in his head without actually leaving the place where he's at. Watson, on the other hand, is the "explorer" or the "worker", the man who does all the physical work, searching for clues. Holmes still thinks of Watson as an amazing detective and very important to every case he does, as he mentions twice in the book about Watson being "the man of action" (page 140) and also him being there at the "hour of action" (page 30) this is showing us how Holmes is the superior one and Watson is inferior the pair. ...read more.

Sometimes an author can use this technique to create an irony in the story or the other way round just to confuse the readers. Sometimes by having a sidekick, it can even make people feel they are in the story by letting the readers find out something very crucial to the storyline at the same time as the characters. When they found out that the dog had killed Selden instead of Sir Henry was an exciting and relieving part of the book where one felt the same as the characters. When they found out who it was who was trying to kill Sir Henry or even at the time when Mr and Mrs Stapleton were found out not to be brother and sister. All of the times, we experience similar feeling to the narrator. It can also help to display the emotions between Holmes and Watson at different times throughout the book. Watson becoming angry in the middle of the book because of something he had not found out that Holmes had known is an example of when the relationship of Holmes and Watson gets a bit tangled up. There are lots of different aspects of the relationship between Holmes and Watson. All these aspects have been thought about before writing the book and this is what makes the book so enjoyable. ...read more.