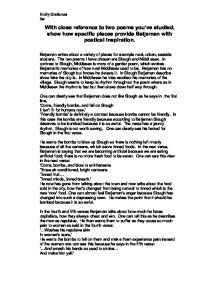 With close reference to two poems you've studied, show how specific places provide Betjeman with poetical inspiration. Betjeman writes about a variety of places for example rural, urban, seaside etcetera. The two poems I have chosen are Slough and Middlesex. In contrast to Slough, Middlesex is more of a gentler poem, which evokes Betjeman's memories of how rural Middlesex used to be. Betjeman has no memories of Slough but knows he detests it. In Slough Betjeman describe show fake the city is. In Middlesex he tries recollect his memories of the village. Slough seems to keep its rhythm throughout the poem where as in Middlesex the rhythm is fast but then slows down half way through. One can clearly see that Betjeman does not like Slough as he says in the first line, 'Come, friendly bombs, and fall on Slough It isn't fit for humans now,' 'Friendly bombs' is definitely a contrast because bombs cannot be friendly. ...read more.

And make him yell.' Although Betjeman mostly uses place for inspiration he now has gone on to speak about the people who live in Slough and how they've modernised like the city has. In verse nine he talks about the women of Slough. They are as fake as the city because they die their hair instead of leaving it their natural colour and dry it with hair dryers instead of letting it dry naturally in the air. This is unnatural. '...Their wives frizz out peroxide hair And dry it in Synthetic air...' In the last verse he has used repetition of the first line that shows he must really want the bombs to come. After the bombs come he wants the city to return to the countryside. He wants to get rid of the artificial foods and return to organic foods. Middlesex has quite a busy rhythm at the start, which fits in with the business of the city and the travelling of the train in the first verse. ...read more.

There are small country pubs for the 'real people'. These people that are not proper are buried under the pollution of the big cities not the tourists that come from London. 'Taverns for the bona fide, Cockney anglers, cockney shooters... Long in Kensal Green and Highgate silent under soot and stone.' Betjeman has now changed from place at the start of the verse and has gone on to say that the little country pubs are only meant to be for the locals, not the tourists, this is about the people not Middlesex. Betjeman uses place as his initial inspiration. Having considered this as his starting point he then explored other subjects, for example how the places had changed from how he remembered them or the people who lived in the places he describes or the architecture of the buildings. The sense of place made him then want to pursue other ideas. He makes other points as well as writing about the specific town, village, seaside etc. Place seems very important to Betjeman. Emily Shallcross 9w ...read more.