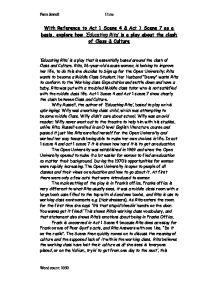 With Reference to Act 1 Scene 4 &amp; Act 1 Scene 7 as a basis, explore how Educating Rita is a play about the clash of Class &amp; Culture

With Reference to Act 1 Scene 4 & Act 1 Scene 7 as a basis, explore how 'Educating Rita' is a play about the clash of Class & Culture 'Educating Rita' is a play that is essentially based around the clash of Class and Culture. Rita, 26-year-old scouse women, is looking to improve her life, to do this she decides to Sign up for the Open University; Rita wants to become a Middle Class Student. Her Husband "Denny" wants Rita to conform to the Working class Expectation and settle down and have a baby. Rita was put with a troubled Middle class tutor who is not satisfied with the middle class life. Act 1 Scene 4 and Act 1 scene 7 show clearly the clash between Class and Culture. Willy Russell, the author of 'Educating Rita', based to play on his upbringing; Willy was a working class child, which was attempting to become middle Class. Willy didn't care about school. Willy was an avid reader; Willy never went out to the theatre to help him with his studies, unlike Rita. ...read more.

You wanna get it fixed!' This shows Rita's working class vocabulary, and that statement also shows Rita's emotions about being in Franks Office. Frank is concerned in Act 1 Scene 4 because Rita does an essay for Frank on one of Peer Gynt's acts, and Rita Answers with one line. "Do it on the radio". The Scene then quickly moves on to discuss the meaning of culture and the supposed lack of it within the working class. Rita believes the working class have lost their culture as all she sees is 'everyone pissed, or on the Valium, tryin' to get from one day to the next', this makes Rita hate the Working class even more After this discussion between Frank and Rita, Rita decides that she wants to move away from the working class culture. Later in that scene this is shown when Denny refuses to accept the fact that Rita wants to get herself an education and so she has to do all of her educational work at her normal workplace, the hairdressers, where she has a lot of things to distract her. ...read more.

When Rita sees her mother's regret it makes Rita determined to go on with her education. The moral of this play is that when classes clash it can be very dangerous and could, in Rita's case, part away with her family. When a person rarely travels down the path to change their choices and options, they find it extremely difficult as expectancies are very hard to meet. The classes are not necessarily better than one another but simply different. The working class and middle class both have their own culture and while one may not be better than the other, the middle class offers greater opportunities. This class difference theme does link to today, the class trap does still exist today however much it may not be apparent. . In order for people to change where their lives are headed they need support and with the class divisions in place and expectancies to meet that support is sometimes hard to get. ?? ?? ?? ?? Piers Jewell 11mc Word count: 1050 ...read more.

This is a good essay that uses quotes that are often relevant, but would benefit from a better quality of writing and more developed technical vocabulary. The student understands the demands of the question - they usually reference the relevant ...

This is a good essay that uses quotes that are often relevant, but would benefit from a better quality of writing and more developed technical vocabulary. The student understands the demands of the question - they usually reference the relevant scenes, and they also explore the clash of class and culture in the play. This is good as it shows that they are on task and have enough knowledge to answer the question set. In terms of referencing the scenes, they use good and relevant quotations, which is good as it shows they can back up their analysis with evidence rather than making inaccurate statements. However, you should always take care to remember you are quoting the right scene: the student uses the quote "It's that stupid bleedin' handle on the door. You wanna get it fixed!" which is in fact from Act 1, Scene 1 rather than Scenes 4 or 7 - the question only asks for these two scenes and it is usually better to stick to what the question asks as it shows you are on task. However, elsewhere in the essay, the student shows an ability to quote parts of the play that are relevant and suitable to the consideration of a clash between class and culture - such as the dinner party scene, which is an ideal scene for a question like this because it is one of earliest contrasts between Frank's middle class lifestyle and Rita's working class roots.

This essay would be improved hugely if the student had used more developed technical vocabulary. For example, when discussing the contrast between the two classes at the dinner party, the student could have said that "Russell has juxtaposed the two classes..." ("juxtaposed" means two different ideas being contrasted for effect). This would have been good because it would have shown that the student has an understanding of terms that are usually used specifically in the study of literature, rather than the general terms they use in this essay, such as "clash". The conclusion of the essay should answer the question by summarising the ways Educating Rita could be seen as a clash between class and culture. However, this student appears to answer the question "Does and should the class divide exist?", and doesn't refer to the play at all. The conclusion should be about answering the question by summarising what has been written in the essay, to show that you can organise your ideas and reach a judgement.

The student is right to bring in the context of the play, and the increasing opportunities for women. However, because they discuss this in a paragraph (the third) of its own, it makes it seem as though context has simply been added in, rather than being combined with the analysis. It would be better for the student to bring this context in after they have made a point about Rita. Where they say "...the fact that Rita wants to get herself an education...", they could have said "...wants to get herself an education, something that was becoming easier to do due to the Open University...". This would show that they understand the influences on the text, and can complement this understanding with their understanding of the play, rather than just knowing facts about the Open University and adding them in anywhere.

There are several spelling mistakes in the essay, such as unnecessary capital letters - in "she shows this by Thinking what to wear", "Thinking" does not need a capital. Although the essay can still be understood with these mistakes, they make it seem rushed and as though it hasn't been proofread. The student should also avoid referring to the author by his first name: this sounds informal and unsuitable for a serious academic essay, and it would be better to refer to him as "Russell". The paragraphing also needs improvement, and a paragraph should always contain more than one sentence. For example, the second-to-last paragraph would be better in the conclusion as it would give the essay more of a logical flow.