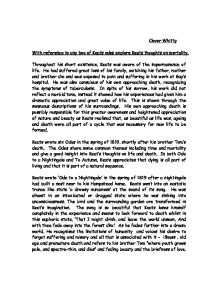 With reference to any two of Keats odes explore Keats thoughts on mortality.

Clover Whitty With reference to any two of Keats odes explore Keats thoughts on mortality. Throughout his short existence, Keats was aware of the impermanence of life. He had suffered great loss of his family, watching his father, mother and brother die and was exposed to pain and suffering in his work at Guy's hospital. He was also conscious of his own approaching death, recognizing the symptoms of tuberculosis. In spite of his sorrow, his work did not reflect a morbid tone, instead it showed how his experiences had given him a dramatic appreciation and great value of life. This is shown through the sensuous descriptions of his surroundings. His own approaching death is possibly responsible for this greater awareness and heightened appreciation of nature and beauty as Keats realised that, as beautiful as life was, ageing and death were all part of a cycle that was necessary for new life to be formed. Keats wrote six Odes in the spring of 1819, shortly after his brother Tom's death. The Odes share some common themes including time and mortality and give a good insight into Keat's thoughts on life and death. In both Ode to a Nightingale and To Autumn, Keats appreciates that dying is all part of living and that it is part of a natural sequence. Keats wrote 'Ode to a Nightingale' in the spring of 1819 after a nightingale had built a nest near to his Hampstead home. ...read more.

Stanza seven is ambiguous as he suddenly claims that the nightingale is immortal and its song has been heard throughout history, the birds song brings solace and comfort to people as it never dies and is able to feed people with a sense of happiness. As the poet is bought back to a sense of reality and self consciousness the nightingales song fades at the same time as Keats imagination fails and so he is left wondering if this experience is reality or a dream 'Was it a vision, or a waking dream? Fled is that music: - Do I wake or sleep? ' Ode to a Nightingale can be seen as an escape from reality and it does this in a number of ways , through drugs, poison, wine, imagination and death. It attempts to leave the misery and sickness of the real world to the beautiful world of nature , it celebrates the vitality of natural life and death is only a passing temptation. To Autumn demonstrates the passing of time, it is a poem of partings - of the day, the season and of life itself. The poem reflects the progression through life and from birth through maturity to ageing and death. Keats uses the concept to illustrate that although Autumn leads to death and extinction, the cycle is necessary for the progression of life and nature as it all is part of a cycle that eventually leads to new life in the spring. ...read more.

Instead, death gives a sense of order. Ripening is a natural process. Life should be lived to the fullest and be enjoyed. 'fill all fruit with ripeness to the core'. Through exploitation and harvesting, a heady 'fume' of consciousness can be reached where our own mortality can be forgotten. Without Autumn, there would be no spring. Human life is linked to change which ultimately brings renewal. The point of death is also the point of life. Keats successfully combines the sense of both joy and sadness in 'To Autumn'. Nature continually renews life, plants animals, birds, insects and although Keats ends the poem on a more sorrowful tone, he does convince the reader that life will return. Through his poetry, it is clear that Keats is well aware of the cycle of life and accepts death as a part of it. At the same time, he savours nature and beauty and uses his imagination to transport himself into a euphoric state where he doesn't know the difference between reality and a dream like state, body and spirit, life and death. He doesn't see death as the end and believes in immortality as he wrote in a letter to his brother in America, 'The last days of poor Tom were of the most distressing nature; but his last moment were not so painful, and his very last was without a pang' and this is reflected in his Ode to a Nightingale when he says 'Now more than ever seems it rich to die, To cease upon the midnight with no pain'. ...read more.